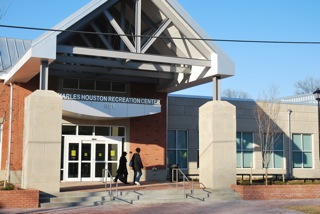 When Mayor Bill Euille used a giant red pair of novelty scissors to cut the ribbon at the new Charles Houston Recreation Center on Wythe Street Saturday, hundreds in attendance applauded the dedication, about eight years in the making.

The fresh and clean 35,000 square-foot building contains a basketball court and exercise room complete with new equipment and other modern amenities intended to serve not only the areas youth but adults and seniors as well.

The new Houston center serves its namesake as well, paying tribute to the civil rights lawyer who helped rid the country of Jim Crow segregation and aided in educating Thurgood Marshall. For alumni of the segregated Parker-Gray High and Elementary Schools of the 1920s and 1950s in the same neighborhood (some of whom were in attendance at the ceremony), it was also a special day.
But as gleaming as the new structure is, the story of its conception was anything but immaculate. What began in 2001 as an estimated $4.2 million renovation to the old Charles Houston Recreation Center topped out as a $15.3 million construction project, according to the citys 2009 capital improvement program.

The process to improve an aging but functional Charles Houston began in 2001 when the city contracted a consultant to assess the needs of the citys recreation centers and develop a master plan for the citys Department of Recreation, Parks and Cultural Activities. Having conducted the study, the consultants advised that the city needs to renovate the infrastructure of the current recreation centers, especially at Charles Houston and Patrick Henry Recreation Centers, according to the strategic master plan. In addition to improving the West Ends Patrick Henry Center, it also pointed out the need for a
whole new recreation center to serve the citys west-side residents.

Both centers were viewed as priority centers in terms of improvements and renovations, said William Chesley, deputy director of the Department of Recreation, Parks and Cultural Activities. Part of Chesleys job is overseeing all of the citys recreation centers. The Houston center at the time had some significant mechanical problems with heating and ventilation and we were concerned about the amount of money it would take to replace those systems.

The 2004 capital improvement program allotted $4.2 million for Charles Houston improvements and $3.6 million for Patrick Henry, each over a three-year period. Five years later the Charles Houston Recreation Center has been razed and rebuilt while the West Ends Patrick Henry Recreation Center is listed as an unfunded project on the citys newest capital improvement program document, a victim of the current economy but also of the Houston center, which ate its funding.

A compound of the mechanical problems, what officials noted as the increasing cost of construction materials and the preliminary scope of work, and other snags on the oft-bumpy construction road kept spiking the cost of Charles Houstons improvements. By 2007, the capital improvement program allotted $8.6 million to the center after already spending $500,000 of the allocations on planning.
But Patrick Henry bore the brunt, as the 2007 capital improvement program ordered that $3 million of the centers money be reprogrammed to the Charles Houston project, which by this time was a demolition and rebuilding project, not simply a renovation.

Following staff analysis of four different design options, it was determined that the cost to build a new facility was similar to the cost of a major renovation/addition, the CIP document stated. And that the added value of newer finishes and technology, the incorporation of green elements and greater space efficiencies make a new facility more viable.

We kind of had to put all of our eggs in one basket, Budget Director Bruce Johnson said.
About $2 million in unplanned undergrounding of cables and electric wiring for Charles Houston usually a cosmetic move added to the total as well.

The initial plan was to upgrade the facility and perhaps modernize the facility, Chesley said. The idea of tearing it down only came after the architects and general services staff determined that the cost of a modernization or renovation was creeping up to the point where the thought was it was more cost effective for the city [to raze the building]. There was a lot of careful thought and consideration in the process.

Numerous community meetings were held with residents and other stakeholders, according to the citys documents.

The Houston facility seemed to demand respect at its coming out party Saturday, but Patrick Henry remains an unfunded project with no money in sight. And with about 8,500 square feet to serve the citys West End, it pales in comparison to the Houston rec on the east side of the city.
The biggest thing were in need of would probably be space, said Bryan Williams, director of the Patrick Henry Recreation Center. We have a lot of kids out here and we could service a lot more if we had more space. Williams said 150 kids are registered (a cap instituted by the city because of space issues) and he deals with 110 to 120 on any given day.

Chesley said the William Ramsay Recreation Center also services Patrick Henrys area of the West End, but there are more people in the area than available space at the center. Charles Houston has the advantage of being detached from any school, allowing more programs and more hours. But the West End, which the original 2001 master plan stated was in need of a brand new recreation center, has not even received improvements for an existing one.