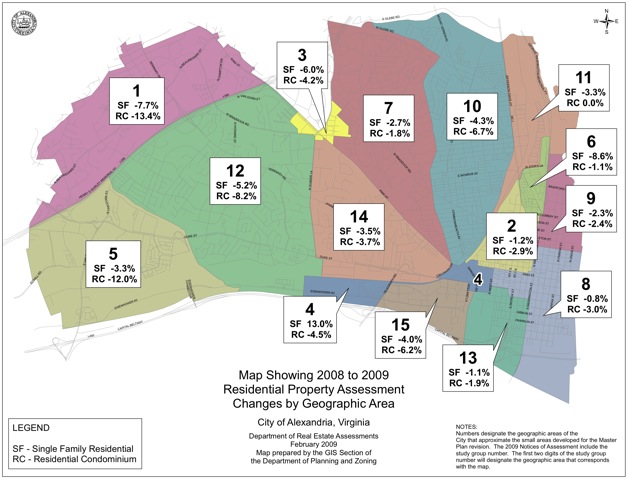 The city sent its annual real estate assessments to every property owner within the city limits last week, realizing for many what most residents already knew: Overall, the residential market is ailing in a downward pattern not wavering and is expected to continue the pattern for the foreseeable future.

Each year, appraising a homes fair market value is based on the homes historical worth, improvements and, most importantly, the neighborhoods selling performance over the previous year. The more money a home sells for, the higher the worth of the surrounding dwellings. It works that way if homes depreciate in value too, as with the current market, with the average residents home value dropping almost $24,000, or almost five percent, according to this years real estate assessments. The evaluations became effective January 1, meaning the data represents 2008 sales and other market trends.

The city proposed a tax rate increase on real estate, coupling it with the real estate assessments to keep the average homeowners tax burden the same at $4,226 (one dollar less than last year). If the tax rate remains static, the average homeowner would pay about $200 less than last year, according to the Office of Management and Budget. But the city hopes to collect about $14 million in much needed revenue from the increase. Still, city staff members say the assessments are a reflection of the market, not an attempt to meet a bottom line.

We dont have any preconceived notion of whats going to happen when we start the assessment process, said Cindy Smith-Page, director of the Department of Real Estate Assessments. I think a lot of people dont understand that everything we do is like state code. It has nothing to do with local jurisdiction. And were also monitored by the state the Virginia Department of Taxation.
Assessments dictate a homeowners taxes, making the subject a prickly one by nature, especially in the current economy. Smith-Page said her office, though busy, has not yet been flooded with requests for individual reviews of assessments, though residents have until April 1 to challenge their evaluations.
Smith-Page said it is encouraged.

People are never going to be completely satisfied, Smith-Page said. Weve had appeals both ways too high and too low depending on the market. Each person has individual motivation to review their appeal and everyone knows their own property value better than anybody else.

Homeowners whose home values increased or stayed the same in an otherwise down market could have made improvements to their property by renovating or expanding it. If the budget passes with the proposed tax rate increase, these homeowners will pay a real estate tax above the city average.
About 11 percent of the citys homes were assessed at the same value as the previous year, according to Smith-Page, which has some residents questioning the validity of the appraisal in an otherwise falling market. These instances occurred in areas with traditionally high home prices, like the neighborhoods near the river in Old Town, where the market is relatively insulated. However, because the assessments are a reflection of a given neighborhoods sales, the tumbling amount of transactions means the assessment office has less data on which to act, resulting in a broader sampling of home sales. So the data becomes less area-specific and more general.

The sales volume is down significantly so we have to analyze sales in larger groups together, Smith-Page said. And it really has held true in the last couple of years that the Old Town market is fairly insulated so most of the southern part of the city is.

It is evident that assessments are, at their base, educated guesses. One home on Duke Street, three blocks away from the water, was appraised at $5,612 less than last year. Two houses in the same study group have already been sold since January 1. One sold for about $1.4 million $123,559 more than its new appraisal. The other, appraised at $650,504, sold for just $617,000 a significant chunk less than its apparent worth. Homeowners in adjoining areas received assessments stating their homes are worth the same as they were last year despite the market, meaning their taxes will be higher than average. Still, the assessments only reflect the market data available to the city, according to Smith-Page.

The reason [some home values remained unchanged] is the market evidence in the particular neighborhoods reflected that there really were no changes in value, Smith-Page said. The houses that were selling were still selling for what we had them assessed for.