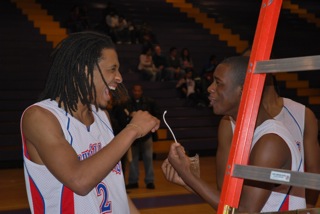 Showing no signs of the barnburner they played the night before, the T.C. Williams boys basketball team went about their business early on Friday night, disposing of the Annandale Atoms 76-57 to win their fourth consecutive Patriot District championship.

With the win, the Titans 70th straight against district foes, all of the T.C. players move on to this years Northern Region playoffs without ever having lost to their backyard competition.
For senior guard Gavin Peterson, the victory felt better than most with the streak on the line.

It just feels so good, when everybody comes into our gym or we go to them on the road, they feel like
its a state championship game if they beat us, Peterson said.

If Friday was like a state championship game for Annandale, the final result became less and less what the Atoms were gunning for as the game progressed.

T.C. had an 18-8 advantage through one quarter and went into halftime up 39-20, led by Petersons nine points and a stingy defense that continued to prey on Annandale miscues.

Titans coach Julian King, in his first season as head coach, said that, unlike some games this season, his team came out fired up from the beginning, making all the difference in the final score.

The intensity we came out with tonight, thats the way T.C. basketball is played, King said. Maybe I didnt start them out in the right defense some games, but we use full-court pressure, these guys really get after it.

The pressure King referred to wrought havoc for the Atoms in the tournament-tense conditions on the neutral court at Lake Braddock.

Going into regional play, with each game potentially T.C.s last of the season, Fridays comfortable win should be a welcome boost for the Titans.

Were sky-high, confidence-wise, and hopefully they keep the same intensity up knowing that if you start a game like that, you have a lot better chance to win, King said.

Edward Jenkins led the Titans with 18 points. Peterson and junior Billy Rowland finished with 13 points each, while Tyrell Sitton added 12 for the Titans, who moved to 23-4 with the win.

Jenkins, a senior captain whos been a member of the varsity team since he was a freshman, helped to cut down his fourth district championship net Friday night, except this time around he got a little bigger piece than he had before.

All my three years I got a little piece of the net, but this year is my senior year so Im taking the whole thing with me, Jenkins said, net draped around his neck.

Since I was little, I watched the T.C. players and I just wanted to play, Peterson said. Now, Ive won four straight district titles, two regional titles, one state title and I just hope to continue what weve been doing.

Regional Notes: T.C. Williams cruised to victory again Monday night, winning 67-41 in their Northern Region first round game against McLean (Liberty District). The Highlanders had no answer for the Titans Billy Rowland who had a career-high 32 points and 11 rebounds. T.C. had 11 players in the scoring column on the night. On February 25, the Titans defeated Stuart 45-41 in their second round game.