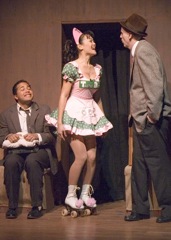 If laughter is the best medicine, there is no better cure than the flamboyant farce of Leading Ladies, the zany Ken Ludwig comedy now playing at The Little Theatre of Alexandria.

The laughs are loud and often in the Shakespeare-inspired parody from Ludwig, who has won numerous Tony, Olivier, Drama Desk and Helen Hayes awards for his works such as Crazy for You and Lend Me A Tenor (produced by Andrew Lloyd Webber).

Set in York, Pennsylvania, in the summer of 1958, Leading Ladies opens as two down-on-their-luck English actors, Leo Clark and Jack Gable, are reduced to reciting scenes from Shakespeare for the Loyal Order of the Moose Lodge in nearby Shrewsbury. When they learn that a wealthy matron on the verge of death is searching for her nephews, Max and Steve, they scheme to inherit her money by passing themselves off as the long-lost heirs.

The foolproof plan takes an unexpected turn when they discover that Max and Steve are really the nicknames of nieces Maxine and Stephanie. Not to be denied, they assume the womens identities, which triggers a series of amorous antics and madcap mayhem.

Leading a production that boasts one of the most talented casts ever assembled on the LTA stage are Charles Boyington and Brandon DeGroat as the cross-dressing partners in crime.

Boyington is Leo/Maxine, who falls head over kitten-heels in love with Meg (Rachael Hubbard), the nave and stage-struck niece of Florence (Mary Blake Suib), the feisty matriarch who refuses to die.
Boyington is particularly dynamic, whether spouting lines from Shakespeare or donning a dress as Maxine. The chemistry between he and Hubbard is especially fun to watch as Megs self-important bore of a fianc, Reverend Duncan Wooley (Michael J. Fisher), desperately tries to salvage his own scheme to get in on the inheritance.

DeGroat, who wowed LTA audiences as the mischievous Kreton in Visit to a Small Planet, is Jack/Stephanie. Animated and immensely talented, DeGroat leaves the audience howling with laughter as he switches with ease from Jack to Stephanie and back again.

With wacky moments too numerous to mention, Boyington and DeGroat are hysterical in their roles and prove to be a theatrical match made in heaven.

Kat Sanchez, who gave a standout performance as Dancer in LTAs The Eight: Reindeer Monologues, is back and even more impressive as Audrey, the delightfully ditzy roller-skating waitress who befriends Stephanie and falls for Jack. A stunning brunette, Sanchez displays great comedic timing and knows how to play dumb better than any blonde around.

Hubbard delivers a charming and solid performance while Suib, as the never-say-die Florence, brings to the show a caustic wit and commanding presence that belie her diminutive stature.

Rounding out the cast are Ron Bianchi as Florences inept doctor, who more than once has prematurely pronounced her dead, and Ted MacDonald as Docs beefy but boring son Butch.

C. Evans Kirk, an LTA veteran celebrating 30 years with the theatre, brilliantly directs this carefully choreographed chaos with laser-like precision, all of which culminates with a surprise curtain call-within-a-curtain call finale.

Comedy is the hardest form of theatre to perform, said Ernie Sult, who first joined LTA in 1942 and continues to attend every opening night performance attired in his customary black tuxedo. You can have the best script in the world, but the timing has to be perfect for it to work, and tonight was perfection.

The audience clearly agreed that all this lunacy is drop-dead funny with sidesplitting antics and whirlwind costume changes from two of the most talented actors around.

As if to underscore the strength of the theatrical ensemble, even Roxy Mame Hubbard, a King Charles Cavalier and member of Therapy Dogs International, never missed a cue when appearing as herself onstage.

Whether you are new to LTA or a season subscriber, there is no better show than Leading Ladies to experience some of the finest laugh-until-you-cry theatre in the area.

And without spoiling the ending, know that our heroine Meg makes the right decision in the end as she is forced to choose between Leo, Duncan and even Maxine. So as Shakespeare himself said, Alls well that ends well.

Leading Ladies is playing now through March 14 at The Little Theatre of Alexandria, 600 Wolfe Street. For tickets or more information call 703-683-0496 or visit www.thelittletheatre.com.