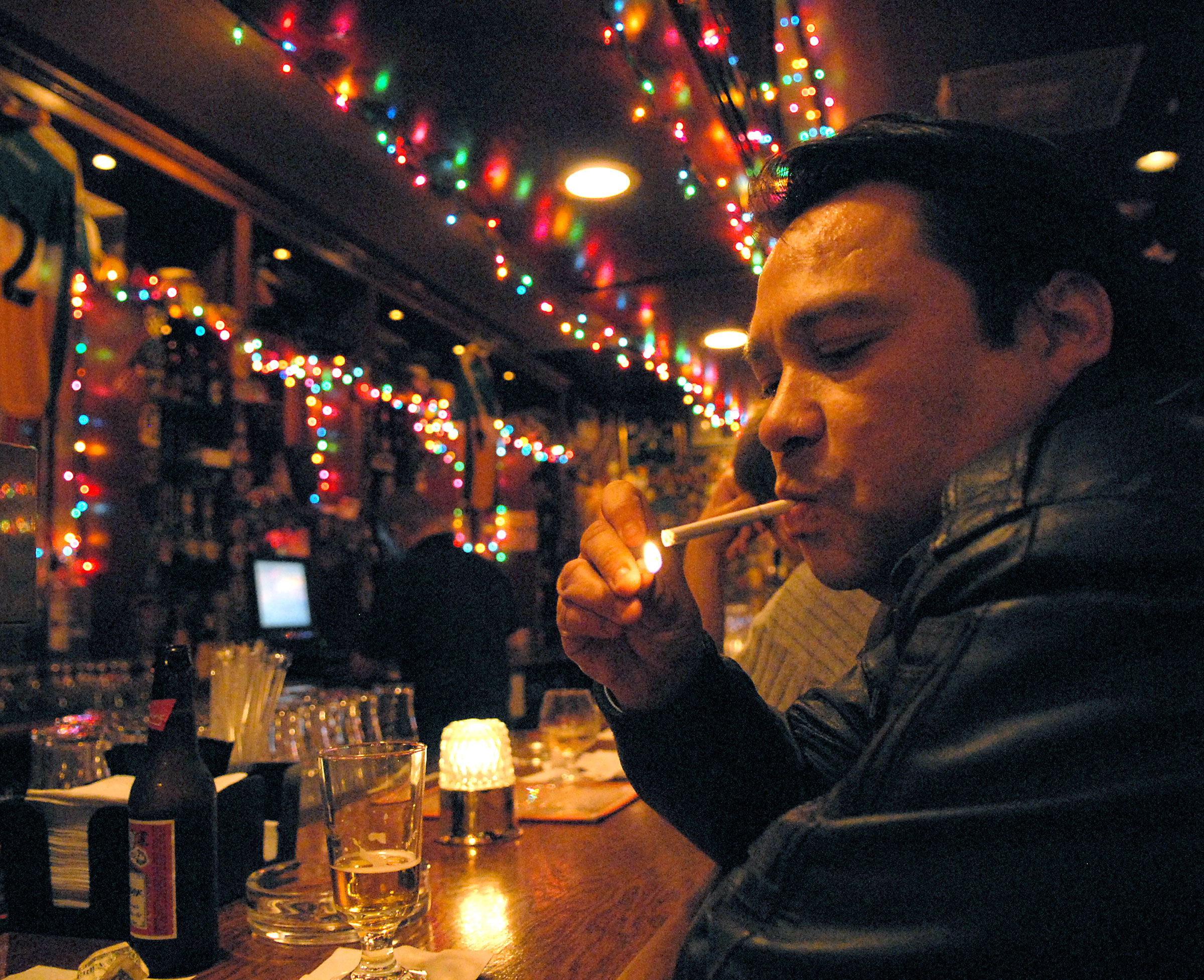 Smoking or non? There was a time when such a question in Alexandria restaurants was as commonplace as having a tap behind the bar. For both smokers and non-smokers, the query represented a choice. The advancement of a smoking ban bill in the House of Delegates Monday has a state mandate for smoke-free restaurants crawling toward reality and, for many, controversy.

Some restaurants in Alexandria took it upon themselves to ban smoking entirely, while others await word from Richmond.

At Alexandrias Austin Grill at about an hour past happy, the bar (a smoking section) mixes causal and everyday smokers with non-smokers, and employees of the same ilk. All are there to provide or enjoy the restaurants services. Opinions about the ban are mixed and often overlap, and seem to paint the ban as a morally ambiguous being: How can everybody the patrons, owners and employees come to an agreement on something that is unhealthy yet is an unregulated personal choice?

Its not a right or wrong, says Lara Reyes, a non-smoker, wine in hand. Its a matter of judgment, a matter of opinion for me. I wouldnt not come here because of smoking, but I prefer bars that have a smoking section and a non-smoking section, like OConnells or Lighthorse. They try to accommodate both and I think thats great. Its nice to have a choice.

But smoking sections can marginalize the rights of tobacco-less patrons. A hostess cannot control a cloud of seeping smoke as easily as she might control her dominion of tables. If smoke from a designated cigarette section seeps into a smokeless area, telling a seated customer not to inhale is not an option.

Governor Tim Kaines preferred version of the bill included a requirement for a separately walled room and separate ventilation system in any restaurant desiring a smoking section, which would combat the creeping smoke issue. But the version that came out of the House Monday gave owners the option of one or the other, negating the whole point of the bill, according to some officials.

So whats the point? queried Councilman Rob Krupicka while discussing the citys Richmond agenda at Tuesdays City Council meeting. Youve completely negated the point of having a non-smoking restaurant.

The bill moved on to the Senate but lawmakers indicated more jockeying before and if the bill is passed.

The House of Delegates on Monday passed a version of the smoke-free restaurants compromise with amendments that gut the legislation; such is the messy legislative process, stated Del. David Englin (D-45) in his Richmond report. However we are virtually assured that the intact compromise proposal, perhaps even with some further improvements, ultimately will come to a vote on the House floor.

For those worried about the cancerous effects of second-hand smoke, the point is to stay healthy, said Chris Beck, a social smoker who was enjoying a beer at the Grill. But to me, you are entitled to certain civil liberties, he said. The right to smell unpolluted air is not an inalienable right. If youre going into the bar to eat or drink, you choose to do that.

Kaine helped drive the bill home by appealing to the safety of restaurant employees as well, but some workers in the restaurant industry question the idea. Bartender Paul Sposari said his tips are down by about 50 percent in the ailing economy and disagrees with legislation that he sees as economically damaging, whether its healthy or not.

I think in a time right now when the economy is [bad], if people choose to go out and the government takes one more thing away that people like to enjoy, why would they go out? Sposari said. I think people should be able to do what they want. I feel like it has to do with civil rights, really. You have the right to smoke.

Its a pretty tough question to answer because there is no way you can please both parties, said William West, a non-smoker and server in Old Town. Im not a smoker but obviously [the bill] affects me. Im sure there are people that care about it but Im not one of them.

Mayor Bill Euille also said that no matter what, you have to crawl before you walk and the bills existence is a step forward for the city. He talked to the governor, who was disappointed with the watered down bill, and some restaurant owners who were concerned about the bills possible effects on their businesses.

They just want something better than nothing that would encourage them and induce them to go ahead and move to go smoke free, 100 percent, Euille said. While the concerns of the watered down version are valid, I think youre going to find many of the restaurateurs not investing money [in new ventilation systems].

As politicians, restaurateurs, employees and patrons smokers and non debate over the merits
and morals of the proposed law, there seems to be more questions than answers creating a smoke screen around the fate of tobacco sticks in a tobacco state.