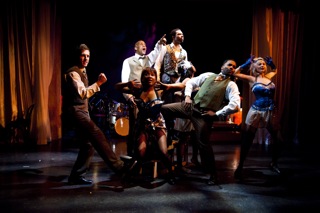 If you think lightning never strikes twice in the same place, you havent been to MetroStage lately.

Just as previews are set to begin in the off-Broadway run of ROOMS a rock romance, which made its world premiere in Alexandria last summer, the intimate theatres latest offering is barely a week old and already planning its own trip to the Great White Way.

Heading first to Atlanta and then on to New York is Cool Papas Party, a toe-tapping new musical with choreography by the legendary Broadway veteran Maurice Hines.

We are thrilled with the response to this show, said producing artistic director Carolyn Griffin. The producers and investors with deep pockets fell in love with it, and they are the ones that can allow the show to grow. We are very fortunate.

With book and lyrics by Thomas W. Jones II and original music by William Knowles, Cool Papas Party tells the story of Cool Papa Rose, a character loosely based on the life of Sammy Davis Jr. Through an innovative score by Knowles, Cool Papa follows the struggles faced by black performers throughout much of the 20th century.

From the early days of Harlem and the Apollo Theatre to the heyday of Las Vegas, Cool Papa features a stellar cast of seven of the finest performers in musical theatre in the region.

Anchoring the show in the role of Cool Papa Rose is Jahi Kearse, an Atlanta native making his MetroStage debut. Kearse makes the transition from young adolescent to veteran performer with ease, captivating the audience with his rich, soulful voice and electrifying footwork courtesy of Hines.

MetroStage favorite Lori Williams is back and better than ever. While fans got a taste of the multifaceted vocalists range in Isnt It Romantic, the Cool Papa score allows Williams voice to soar to new heights with an impressive display of scat and blues.

Rosalind Roz White, who won rave reviews for her portrayal of Pearl Bailey in Pearl BaileyBy Request, is equally inspiring, particularly with her impassioned pleas in Test the Water.

The dynamic Gary E. Vincent is Poppa Sr., a role being taken over by William Hubbard through March 8, when Vincent will return for the final week of performances.

Vincent brings a combination of dazzling dance and poignant tenderness to the role of an African American fiercely struggling to break through the racial barriers in the entertainment industry.

Cool Papas early years are spent performing with Poppa Sr. and Uncle Birdie, played by Anthony Manough. The Broadway veteran is a lyrical tenor whose voice is particularly commanding and clear in Lay Your Negro Down.

With a score comprised of over 30 original songs, everyone gets a chance to shine, including Benjamin Horen in a role inspired by Frank Sinatra and his friendship with Davis as members of the Rat Pack, and Gia Mora, who plays Cool Papas taboo interracial love interests over the years.

The five-piece on-stage jazz band, under the leadership of composer and conductor Knowles, fills the theatre with an impressive blend of gospel, blues and jazz.

But without setting a foot on stage, it is Hines and his choreography that leaves the audience mesmerized. The tap dance icon turned a talented cast of vocalists into an exciting ensemble of precision and athleticism, each delivering a repertoire of moves that would make Davis himself proud.
With cleverly crafted sets by Carl Gudenius and colorful costumes by Kristina Lucka, Cool Papa relives more than a half-century of showbiz traditions. From vaudeville to the days of Laugh In, it is a musical that is deservedly heading for even greater success.

And like its MetroStage predecessor ROOMS, you can say you saw it here first.