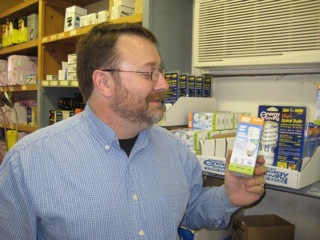 Diana Reeke of Springfield had one big problem with her new chandelier. Despite its traditional appearance, it used only modern fluorescent bulbs. And they are so bright it is hideous, she told Roger Vasilas, owner of The Lamplighter lighting store in Alexandria. Was there any way to get rid of the glare?

The bulbs could not be dimmed, he answered, but he could convert the fixture from fluorescent lighting to the familiar incandescent fashion.

Starting three years from now, he might find it difficult to say the same thing. Under the Energy Independence and Security Act of 2007, all light bulbs sold must use 30 percent less energy than the current incandescent classics. By 2020, all bulbs will have to be 70 percent more efficient.

Light is approximately 20 percent of the average households energy bill, the Environmental Protection Agency explains. This law could cut our nations electric bill by more than $10 billion per year.

As it is, about half of Lamplighter clients are now looking for that squiggly fluorescent shape when they buy their bulbs. On the other hand, many, like Reeke, are not. Some people want them and others cant stand them, he said. Some find them too bright for home use while others dislike the color, which tends to the cold blue end of the spectrum, rather than the warmer yellow. The color is getting a lot better nowadays, he added, but the fluorescent lights still cannot be dimmed.

He hopes that advancing technology will solve the problem. It has already created fluorescents with the usual smooth, un-squiggly design.

Despite the existing drawbacks, about half of the clients are trying to follow the new fluorescent fashion. Some have replaced every (incandescent) bulb in the house, he reported. They have two good reasons for doing so: helping save the environment for humanity and saving money for themselves.

Concerns have been expressed about the fluorescents mercury content. But Vasilas has a recycling bin for the burned-out bulbs, ensuring safe disposal. (You can have mine! Reeke assured him).
Vasilas said that fluorescent bulbs became available to the public around 40 years ago, But the technology was not there yet. By the 1990s, it had improved to the point where interest started growing steadily.

He reports that he saves on his own energy bills by using fluorescent bulbs throughout his store. They even show to advantage in the traditional Colonial and Victorian chandeliers that brighten so many Alexandria homes. The new bulbs also saved on his air-conditioning costs, since they do not emit heat.
The fluorescent bulbs are not the only way of meeting the new energy requirements. High-output, environmentally-sound white LEDs (light emitting diodes) are significantly more efficient than compact fluorescents and last up to four times as long, claims the Gallium LED Lighting Systems. Vasilas displayed a square ceiling fixture designed to hold the bulbs.

Although it can be dimmed, he said, it is best suited for office buildings due to its dazzling brightness and contemporary design.

For home use, however, brighter is not always better. As Vasilas put it, You do want to get romantic sometimes.