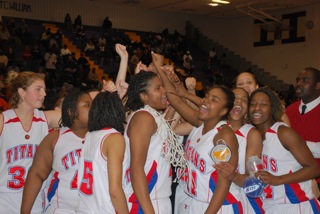 When it was said and done, the Titans got what they came for and Tierra Ruffin-Pratt could safely raisefour fingers for the crowd. Four straight district championship games, zero losses.

In a game that was tight from beginning to end and had just about all the playoff intensity one could hope for, T.C. Williams defeated West Springfield 59-53 to take Fridays first game in a Patriot District championship twin bill at Lake Braddock.

T.C., coming into the game undefeated in district play this season, was up by as many as 11 points during the third quarter, but saw the second-seeded Spartans whittle the lead down to nothing before taking a lead of their own, 46-45, with 4:33 left in the game.

Trading baskets for the next two minutes, the Titans finally turned the tide of the game in their favor when senior guard Monica Fikes knocked down a 3-pointer with 2:07 to go, giving her team a 52-50 lead and an advantage that they would not relinquish.

West Springfield has given us a fight the three times we played them, so we knew it was going to be a dogfight, said T.C. Williams coach Cavanaugh Hagen. Im proud of the kids for bearing down, because its hard to beat a good team three times in a season.

In their two previous contests, the Titans and the Spartans played down to the wire once into overtime but each time, the Titans, district champions once again, came out on top.
And once again it was the Titan seniors, whose experience proved invaluable with the game on the line, who were instrumental in the win.

The first half was all Khalia Boston, with the senior guard scoring 17 of the Titans 31 points, including five 3-pointers. Boston lit up the Spartans to close the first quarter, sinking three straight 3-pointers to help give T.C. a slim 18-17 lead.

In the second half, though, the shots were not dropping nearly as frequently for the Titans, who fell behind after the Spartans went on a 10-2 run. The run, it seemed, re-energized Ruffin-Pratt, who turned around to score a three-point play on the ensuing possession.

We had four seniors out on the court who had been in similar situations four years in a row, Hagen said. Four years of varsity basketball playing for T.C., knowing everything that comes with it, that experience really helped us.

Ruffin-Pratt scored eight of her 15 points in the fourth quarter, while Boston led all scorers with 21 points. T.C. also got nine points from sophomore Jasmine Norman and eight points from Fikes.
Freshman forward Logan Battle led West Springfield with 18 points. Senior Sam Landers added 14 points and was one of the main cogs throughout the game for the Spartans.

Regional Notes: T.C. followed up its Patriot District title with a 48-43 win Monday night in the opening round of the Northern Region tournament against W.T. Woodson (Liberty District). Up by 11 in the fourth quarter, T.C. saw its lead shrink to six points and then five before pulling out the win. Khalia Boston led the Titans, scoring 25 points on the night. Tierra Ruffin-Pratt, named to the McDonalds All-American team earlier in the week, had a quiet night, scoring only six points. T.C. hosted Robinson Wednesday night, winning 68-48 in the second round.