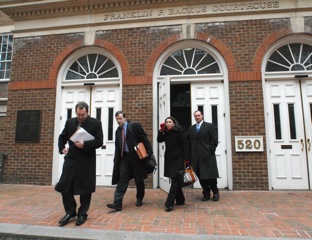 A drawn-out political drama over whether to seat Democrat Charniele Herring (D-46) in the House of Delegates came to an end Monday after a panel of judges decided that the Alexandria Circuit Court had no authority to include 25 uncounted ballots absentee and improperly marked ones in a subsequent recount.

The recount revealed the same thin 16-vote margin originally recorded in the 46th District special election earlier this month. Shortly afterward, Herring was sworn in at the House in Richmond, where the Republican majority had previously refused to seat her until after the recount had been completed.

I am happy to finally put this process behind us and get to work for the men and women of Alexandria and Fairfax County, Herring said in a statement. These are challenging times for Virginia, and I am humbled to have earned their support.

Herrings challenger, Republican Joe Murray, brought the case to court after 25 ballots remained uncounted despite his lawyers arguing their legitimacy. Seventeen of the disputed ballots arrived after the polls for the special election had closed January 13, rendering them unusable according to Virginia law.

Alexandria Circuit Court Chief Judge Donald Haddock, Hampton Judge Will Taylor and Judge Pam Baskerville of Petersburg ruled that the Alexandria court had no jurisdiction; it is a matter for the General Assembly to decide whether the votes should count. Much of the debate was semantic, revolving around legislative language like return as opposed to received and cast as opposed to counted.

The courts lack of jurisdiction now places the burden of controversy on the General Assembly. Virginia elections operate according to when absentee ballots arrive, not by their postmark. Seven of the 25 ballots in question came from overseas (one arrived from Egypt, postmarked before election day) and an undisclosed number of them likely originated from military installations, according to registrar officials. There is no way to tell for sure because the ballots must remain sealed. But some envelopes bore return addresses indicating they originated from Alexandria service people abroad.

In an election where a minute number of votes could have made a difference, the disenfranchisement of overseas voters, namely service members, could gain traction.

I hope the General Assembly will take up a change in the Election Code to ensure that absentee ballot voters, and especially military voters, such as those whose ballots were not counted in this election, will be able to have their votes counted in the future, Murray said in a statement after declining to contest the courts decision. He said at the trial, I support Charniele fully.

Herring was sworn in directly after the hearing and after Alexandrias West End and a portion of Fairfax County went nearly two weeks without representation in Virginias House. Herring attended the Richmond sessions since she was first declared the winner, sitting behind her soon-to-be peers in the back of the House, taking notes on how she would have voted if she were allowed. She plans to use her notes when she runs for reelection this November, filling in the voids for her constituents.