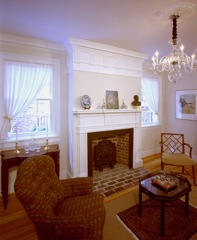 In the old days in Old Town, nobody was green. The locals built houses that were solid, but drafty, then piled logs on the fire trying to stay warm. Its like they never even heard of R-30 insulation or Argon-filled windows.

Today, the owners of those charming but troubled homes are trying to rectify the mistakes of the past.
Take a classic home on Prince Street a distinctive Greek Revival built 150 years ago, when Alexandria was a booming river port. The owners recently invested in a major renovation, shoring up the walls and foundation and adding a new three-story rear addition.

In the process, they managed to render the house a model of energy efficiency. Their contractor, Kingston Custom Builders, took a whole house approach to improving the structures energy efficiency problems, best described as dollar bills floating out the doors and windows.

They were definitely heating the outdoors, says John Schmitt, Kingstons vice president and resident old house guru. Schmitt, who recently completed a green professional certification course at the National Association of Homebuilders, says current technologies make it possible to retrofit oldereven very oldhomes so they perform as efficiently as new ones.

But, in this case, the problem was more complex than usual.
For example, Kingstons systematic, whole-house operational analysis revealed some surprising reasons why the first floor always seemed much colder than the upper floors. Wicking, says Schmitt, matter-of-factly. The basement stayed wet nearly year round, and the walls soaked it up like a big sponge. The house was drafty to begin with, but the damp air compounded the problem.

To stop the wicking, which Schmitt testifies went as high as six feet into the living room, Kingston carefully replaced a layer of mortar in the foundation with metal flashing, creating a moisture barrier. But the drying process was accelerated by the new heating system they installed: radiant flooring.

In terms of long-term energy efficiency, its an excellent option, says Schmitt. Radiant flooring is basically a system of underfloor pipes linked to your hot water heater.

As the term implies, heat radiates from the floor upward through the walls and, most importantly, at your feet. It heats uniformly across the whole surface, Schmitt says. With a forced air system, the area is warmest near the vents; in an older house this can mean youll need to supplement with a space heater, which of course, adds cost.

Remarkably, the thermostatically-controlled water running through the system is typically set to be no warmer than a kitchen hot water tap. Its not like the old radiant flooring, where 120 degree water ran through copper tubing set in cement, says Schmitt. Now the floor panels and tubing are pre-assembled. On Prince Street, we laid an extra layer of R-30 insulation below the panels to help direct the heat flow. In a situation like this, you dont even need to remove the existing floor planks.

The new heating system, which covers 800 square feet on the first floor, allowed Kingston to remove certain non-period elements in the home: the cumbersome radiators beneath the windows and the forced-air ducts in the walls above. With visual obstructions eliminated, the restored mid-19th century interior elevations are pristine and symmetrical.

Of course, sealing the envelope of the existing structure was also critical to success.

Older houses in particular tend to be discretely permeable, says Schmitt. For instance, we found it was necessary to insulate the ceiling of the crawl space below the house. We used a non-expanding foam around outlets, switches and window frames. In the attic, we spot-insulated with foam, then added a layer of R-30 insulation.

The company also installed low-E, Argon-filled windows in the new rear addition but kept the original single-pane bullet glass in the historic front-facing part of the house. We rebuilt the old divided light windows frames, which tightened up the glazing surfaces in the front elevation significantly, says Schmitt.
The second and third floors were upgraded with an advanced Hi-Lo Heating and Cooling diffuser system. Upper vents supply the cool air in the summer; lower vents, the winters heat.

Accomplishing these things will automatically reduce your energy costs, he says, adding that Kingston routinely foams around switches, outlets, and windows as part of any project. These are practical steps anyone can take. And its a lot easier than cutting firewood.