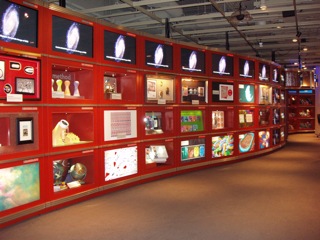 Everyone knows that Alexandria is steeped in history, with the citys founding predating the Revolutionary War. Outstanding examples of historical buildings and museums abound, but did you know that our fair metropolis is the site of a high-tech museum that has visitors from all over the world going through almost every day? Its true, and the United States Patent and Trademark Office (USPTO) Museum, at 600 Dulany Street and just a stones throw from the King Street Metro, is interesting, dynamic and inspiring.

The USPTO has been around protecting great ideas and inventions for over 200 years by issuing patents and examining and registering trademarks, and this 7,000-person agency is part of the United States Department of Commerce. According to the USPTO, it is vital to the U.S. economy that there are effective mechanisms that protect new ideas and investments in innovation and creativity. The main function of the USPTO is to process patent and trademark applications and disseminate patent and trademark information. Through the issuance of patents, the USPTO encourages technological advancement by providing incentives to invent, invest in, and disclose new technology worldwide. Through the registration of trademarks, the agency assists businesses in protecting their investments, promoting goods and services, and safeguarding consumers against confusion and deception in the marketplace.

Although the USPTO has five buildings, the exhibit rooms off its cavernous entry hall are the most accessible and interesting to visitors. This diminutive museum houses the depiction of great ideas that came to fruition. Millions of people dreamed and schemed about things that never were and then went out and invented them or improved upon someone elses widget, gadget or thing. In order to protect the creation of intellectual property, inventors seek patents and trademarks, and the USPTO is both the grantor and the keeper of millions of great ideas and designs. Since the first patent was issued (and signed by President George Washington) to Samuel Hopkins in 1790 for an invention for the making of Pot ash and Pearl ash, over seven million patent and trademarks have been registered with the USPTO.

The three-room museum has a room dedicated to the permanent Portrait Gallery exhibit, which features talking portraits of people from the late 18th century to the present who have made a significant difference to the American system of intellectual property. The portraits include James Madison, Thomas Jefferson, Steve Wozniak (co-founder of Apple Computer), Helen Free (chemist, promoter of science and inventor of many tests that revolutionized certain types of analysis in the laboratory and diagnosis at home), and John Doll (the Deputy Under Secretary of Commerce for Intellectual Property and Deputy Director of the USPTO, and the Acting Under Secretary of Commerce for Intellectual Property and Acting Director of the USPTO). Another permanent component of the museum is the Fleischman Theater, which shows an interesting seven-minute film about extraordinary inventions. The film gives museum visitors a deeper understanding of the scope of creative inventions that have been reviewed by the USPTO.

Currently, there is a rotating exhibit, The Art of Invention, which will be on display until mid-March, which will be followed by an exhibit entitled Inventive Links: Correlations Between the Inductees of the National Inventors Hall of Fame. According to the USPTO, the exhibit will show how National Inventors Hall of Fame inductees are connected in unique and interesting ways. The museums rotating exhibits are on display for 12-18 months and every exhibit includes old patent models and drawings.

Near the entrance to the museum is an unusual looking, tall, oak piece of furniture with lots of drawers called shoes or shoe drawers. From the 19th century until recently, the USPTO used to have these multi-drawer cabinets as standard fixtures throughout its buildings. For over 100 years, patent examiners went to the shoes to check for prior art work when reviewing patents. An annual report from 1879 shows that shoe drawers were purchased for $115 from a livery stable operator, undertaker and cabinetmaker in Washington, D.C. named Augustus Burgdorf. The USPTO is not certain if the name shoes came from cobblers storing the shoes they made to sell in cabinets like the one at the USPTO.

Another story is that the name came from Thomas Jefferson, the first patent commissioner, who is said to have kept all of the earliest patents in shoeboxes under his bed.

The museum is free and does not take very long to peruse. Beside the USPTO museum entrance is a small, modestly priced, creative gift shop with some clothing, assembly kits such as a no battery working flashlight, a staple-less stapler and fun gifts such as a clock that runs on a few ounces of any liquid. On the day I was at the museum, visitors were selecting a wide variety of unique items from the gift shop including DVDs of the history of inventions, T-shirts and Albert Einstein paraphernalia. Each shopper seemed enthusiastic about the item they had found because their purchase was a bit unusual or different. Channing Huhn, the museum manager who also runs the gift shop, states that she enjoys her job and the interesting inventors, patent attorneys, agents and tourists who visit the museum each week from all over the world.

Alexandria resident and USPTO patent examiner, Brenda Bernardi, says her 10-year-old son, Joseph, loved the museum. She explained that her son said, The USPTO has lots of invention patents from 1830 to 2009. The knowledge you learn there is better than the best. If you want to be an inventor or patent officer, you need to put down the newspaper and go, right away, to visit the museum.