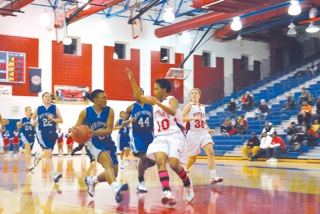 It is rare to see a game that is truly over at halftime. With T.C. Williams leading 35-2 against West Potomac after two quarters, this was one of those games.

Capitalizing on a tenacious, active defense and some early foul trouble for the Wolverines, the Titans led 15-0 at the end of the first quarter. By the time Kelly Wood had scored the visitors first two points with 4:56 left to play in the second quarter, T.C. Williams, the tournaments top seed, held a 25-0 advantage.

The final score was no closer, as the Titans went on to win its opening round game of the Patriot District playoffs 77-13, securing passage to play Annandale in the second round on Wednesday and bringing them one win closer to a regional playoff berth.

Annandale, the fifth seed in the tournament, beat Lee 57-47 on Tuesday. The winner of Wednesdays game will play either South County or West Springfield Friday at Lake Braddock (7 p.m.). Results of both games were unknown at press time.

With no day off between the game against West Potomac and the second round game against Annandale, Titans coach Cavanaugh Hagen was glad to be able to rest many of her starters and provide her substitutes with valuable playing time to start what could be a very busy week for her team.
Obviously, this game we wanted to prepare for the next game, but we wanted to make sure we had it won during tournament time you never know whats going to happen, Hagen said. We got a lot of kids in the game who havent seen as many minutes, so when we go the bench tomorrow, or possibly Friday, were ready.

From the get-go, T.C. found success in pushing the ball up the court, scoring its first two field goals on fast break layups. The games first basket came after sophomore guard Jasmine Norman stole the ball and took it down the court for a quick two points with 7:11 left in the first quarter.

Slowly adding to their lead at the offensive end, the Titans switched to a 2-3 zone defense mid-way through the first quarter, allowing them to rest their legs and work on different schemes for their postseason future, Hagen said.

It was an unusually short and low-scoring night for T.C.s Tierra Ruffin-Pratt, who was substituted at 6:10 in the second quarter after she had scored her final points of the game when she was fouled on a strong drive down the lane, sinking the layup and the ensuing free throw.

Coming out of the intermission, T.C. continued to increase their lead, scoring nearly every trip down the court. By the time Wood scored the Wolverines second basket of the game, the Titans already had the game in their pocket, holding a 54-4 advantage.

Hagen said that Tuesdays lopsided victory was not necessarily the Titans best outing of the season,
I wouldnt say that was our best game of the year, Hagen said. I think the second quarter against Hayfield [regular season finale] more reflects what were capable of. Tonight I was trying to get them to move the ball around and get everyone involved.

When everyone is involved, everyone seems to play better on offense and defense.
Monica Fikes led the Titans with 18 points, while senior guard Khalia Boston and sophomore Loraine Summa both had 11 points apiece.

Wood led West Potomac with four points and Kiara Artis added three.
The Wolverines end their season with a 1-20 record. T.C. improves its record to 20-4 with the win, and turns right around for Annandale on Wednesday.

For the Titans, things are looking bright but, like Hagen said, anything can happen.
Im confident, the kids have their legs, they know whichever team it is they will have a good gameplan, but if we keep playing well, together, we should be fine, Hagen said.