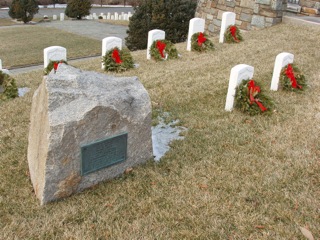 President Abraham Lincoln loved the United States of America and was by all accounts extremely troubled by the Civil War. For the citizens of the City of Alexandria, which was taken into Union hands at the start of the war, there were conflicting feelings and divided families: some were pro-Union while others were firmly for the Confederacy.

The connections between Alexandria and Lincoln are not especially well-known or deep, but they do in fact exist, and are sadly highlighted by significant events at both the start and end of the Civil War, beginning with the first known casualty of the war and ending with the building of the train that transported Lincolns body home to Illinois after his assassination.

Robert E. Lee, a native of Alexandria, was living in his house, the Custis-Lee Mansion (on the hill at what is now Arlington Cemetery), when he received a request from President Lincoln asking him to lead the Union Army. Lincoln admired and respected Lee. When rumors of secession were rampant, Lee is purported to have called secession a revolution and moreover, a betrayal of the Founding Fathers. Lee was torn; he thought that the South could not win a long drawn-out war and the potential loss of American lives weighed heavily on him. However, Lee could never agree to lead the Northern army against his native Virginias men and other southerners. In the end, Lee turned down Lincolns offer and became the commander of Virginias military forces at the beginning of the Civil War.

Lincolns personal family friend, the young Colonel Elmer E. Ellsworth of Chicago was the first death of the Civil War as a result of his being shot in Alexandria on May 24, 1861 just after he removed a Confederate flag from the roof of a hotel. Lincoln was so moved when he heard of the death of Ellsworth that he is reported to have cried.

On May 24, Ellsworth and his troops came by boats down the Potomac River to Alexandria and took the railroad station. Next, he went with four Union soldiers to the Marshall House Inn, climbed the stairs to the roof and removed the Confederate flag, which supposedly could be seen from the White House. As Ellsworth came down the stairs, the hotel proprietor, Captain James W. Jackson, shot him. Jackson was then shot and killed by Ellsworths troops.

Ellsworth was so close to the Lincoln family that they even had his casket in the East Room of the White House before he was buried. Both President Lincoln and his wife are said to have wept at his funeral. The Lincolns knew Ellsworth well because he had worked at Lincolns law office and helped with Lincolns fall campaign. After the election, Ellsworth accompanied the family on their pre-inaugural trip to Washington. He stayed at the White House for a while and some accounts say that Ellsworth played regularly with the Lincoln children.

William O. Stoddard, a presidential aide to Lincoln, later wrote about Ellsworths death in Alexandria and the Civil War. He stated: The hazy atmosphere of semi-tragic unreality pervaded at last even the White House itself. The bright spring weather aided the effect of the increasing glitter of uniforms flutter of flags and all but ceaseless martial music from the noisy bands of the arriving regiments. But now the stark truth had dawned in the death of one man.

The Marshall House Inn is now the site of the Hotel Monaco on King Street. There is a plaque on the building near the corner of King and South Pitt streets, which was placed on the building by the Daughters of the Confederacy. The plaque commemorates the shooting event and honors James W. Jackson, the hotel proprietor who killed Ellsworth.

On April 1, 1862, President Lincoln personally traveled to Alexandria to meet with General George B. McClellan, who was set to begin a four-month battle campaign on the Virginia Peninsula.

Four brave men who died helping chase down Lincolns assassin, John Wilkes Booth, are buried in Alexandria National Cemetery, which was established at 1450 Wilkes Street in 1862. After John Wilkes Booth shot President Lincoln, he fled on horseback and headed south; Booth was suspected to be somewhere between the Potomac and Rappahannock Rivers. A massive manhunt ensued and four Quartermaster Corps employees, Peter Carroll, Samuel N. Gosnell, George W. Huntington, and Christopher Farley, were part of the intensive search for Booth. The Quartermaster Corps are the supply and support troops for army units and usually considered to be relatively safe military duty. Unfortunately, the pursuit of Booth by these four quartermaster corps cost them their lives when they drowned in the Rappahannock River on April 24, 1865. A granite boulder with a bronze plaque was placed by the United States government beside their graves in the Alexandria National Cemetery on July 7, 1922. The monument rock is in the middle of the first row of graves to left of the flagpole when one enters the cemetery.

President Lincolns personal train car was built in Alexandria by the U.S. Military Railroad and completed in April 1865. Unfortunately, the beautiful, brown 48-foot long train car was never used by Lincoln while he was alive. Sadly, it was used to carry his body back to Illinois for burial.

If you know of other connections between President Lincoln and Alexandria, please email the Alexandria Times at [email protected]