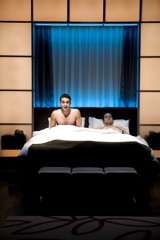 Women want him and men want to be him. Hes Hollywood actor Mitchell Greene, whose rise to stardom could be complete if only he can contain his slight, recurring case of homosexuality, in The Little Dog Laughed, now playing at Signature Theatre.

Making its Washington area premiere, the Tony Award-nominated comedy by Douglas Carter Beane is an outrageous satire of Hollywood greed, lust and ambition, where being a superstar means never having to say youre homosexual, only that you can play one in the movies.

Little Dog follows Mitchell and his acerbic agent Diane from Hollywood to New York, where they hope to secure the rights to a hot new play in order to make a movie starring guess who. Things get complicated when Mitchell drunk-dials a male escort service and ends up falling in love with the gay-for-pay rent boy Alex.

A shark in stilettos, Diane is not about to see her hard work shaping Mitchells career go to waste, so the master manipulator takes matters into her own hands, stopping at nothing to get what she wants.

Playing the brash and profane Diane is the mega-talented Holly Twyford, a three-time Helen Hayes Award winner who should be dusting off a place on her mantle for number four.

In a role that won Julie White a Tony Award for her performance on Broadway, Twyford doesnt just take command of the stage, she owns every inch of it. Her razor-sharp delivery of one-liners draws nonstop laughs as well as blood.

Dressed in everything from evening wear to power suits, Twyford lures the audience to the edge of their seats with anticipation every time she is on stage. Her riveting performance is one of the best in theatre and a brilliant display of comedic timing and wit.

Playing the requisite chiseled hunk seeking stardom is Matthew Montelongo, who gives the conflicted and first-time-in-love Mitchell just the right touch of tenderness mixed with narcissism.

The equally buff Ivan Quintanilla is the hooker-with-a-heart Alex, whose friends-with-benefits companion Ellen only complicates his feelings for Mitchell.

If all this sounds depressing, its not. Little Dog is deliciously wicked, scathing and filled with nonstop hilarity.

Twyford and Montelongo play well off each other, as evidenced in perhaps the funniest and most cleverly written scene in the play a lunch date with an unseen playwright.

Twyford breaks down the fourth wall several times within the script, guiding the audience to intermission as well as opening the second act. One of the funniest moments in the play was unscripted, when a woman in the audience shrieked as Twyfords entrance to a scene startled her. Without missing a beat and always in character, Twyford improvised, incorporating the incident into her dialog, leaving the audience in stitches and the other actors on stage barely able to contain their own laughter.

Rounding out the four-member cast is Casie Platt as Ellen, a Westchester-raised party girl between sugar daddies. Platt gives a particularly poignant performance with Ellens recounting of her making love with Alex and realizing that he is thinking of someone else.

Under the direction of Michael Baron, Little Dog is a masterful display of precision, a series of biting monologues and perfectly choreographed overlapping scene transitions.

The multipurpose set by Lee Savage is a modern marvel that utilizes every inch of the ARKs intimate 125-seat theatre, using a giant bed as a centerpiece and creating several defined areas for various scenes.

Little Dog contains sexual situations, brief (but full) male nudity and side-splitting laughs. Audience discretion is advised, and attendance encouraged. Shocking, profane and wickedly funny, you will love every minute of it.

The Little Dog Laughed is playing now through March 8 at Signature Theatre, 4200 Campbell Ave., Arlington. For tickets or more information, call 703-820-9771 or visit www.signature-theatre.org.
Please take note: This production includes mature themes, nudity and explicit sexual content and is not recommended for children.