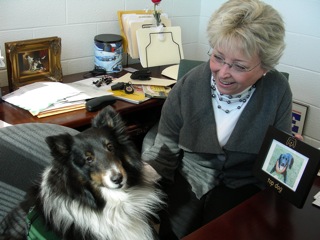 I was very excited last Thursday to have the opportunity to interview Martha Armstrong, the new Executive Director of the Animal Welfare League of Alexandria, which is also the Vola Lawson Animal Shelter.

Armstrong has an impressive resume with more than 30 years of experience as an animal sheltering professional. This is her third time back in our area. From 1980 to 1984, I was at the Animal Welfare League of Alexandria, and then from 1996 to 2005 I was with the Humane Society of the United States, and now here I am again in Northern Virginia, said Armstrong.

When she heard about the opening here at the AWLA she was very interested. Armstrong had moved to Knoxville, Tennessee, and was consulting with animal welfare organizations around the country. I missed the day-to-day work of being in an animal shelter, Armstrong said. I missed being at the table with my peers, being a player and having a network of people where we see every day if what we are doing is working.

Before deciding to take the job as executive director, Armstrong looked at the financial health of the AWLA. She checked staffing levels and demographics, stats and policies and the commitment of the board of directors, the city and the citizens to support the mission of the AWLA. Impressed and sufficiently challenged, she made the decision to take the job.

Most Alexandrians know that part of the AWLAs mission is to provide shelter to animals in need and to promote adoptions. As a shelter dog myself, I really endorse that purpose. Did you know that 25 percent of the dogs available for adoption are purebred, like me? A few weeks ago there was a shooting at Cameron Station. There was a dog in the family that spent some time at the AWLA until the family was able to resume responsibility. In circumstances where a family needs a temporary place for their pet companion, due to illness or a fire or other emergency, the AWLA can take in that pet for a short stay.

Part of the mission that you may not be as familiar with includes inspiring compassion for all living things, promoting animal welfare, and educating pet owners in the community. If you love animals, the AWLA should be on your best friends list. We are a place of new beginnings and not a place where homeless animals come to die, said Armstrong. We are a fun place to come for events, like the Feline Follies and the upcoming Midnight Madness party on Saturday, February 21, from 5 p.m. until midnight. Wear your pjs and come find a new family member.

Two pressing things we are dealing with right now are the economy and cats, cats, cats, Armstrong added. The economy is greatly impacting pet owners; vet care, lost jobs, and foreclosures are all taking a toll. Regarding the cats, we have done a good job working on responsible dog ownership but we have not done so well on cats. We have to take a look at our cat program here in Alexandria.

Armstrong talked about the lifespan of an outside cat versus an inside cat. A cat that lives inside is expected to live 16 to 20 years while the life of an outside cat is a maximum of three years. According to the American Pet Products Association pet owner survey, 76 percent of cat owners report that their cats chose them. That means that there are many cats running around neighborhoods without homes and probably no health care.

In next weeks column I plan to tell you about a joint rescue by Animal Control and the Alexandria Police Department with a merry chase in the cemetery. Ill also be telling you Olivers story. Both stories have happy endings thanks to the AWLA.

For more information on the AWLA and how you can get involved, visit their web site at www.alexandriaanimals.org.