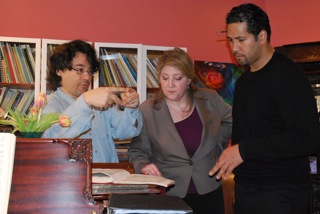 A new workplace, new coworkers, probably a change in pay and daily routine are all part of the equation. Then theres the new skill set some adjusting is necessary.

However, if you thought it was difficult switching from the childhood paper route to that first internship, or transferring to an administrative position, meet Tau Pupua, the tenor headlining this Valentines Day weekend with the Alexandria Symphony Orchestra.

Pupua, a former NFL defensive lineman with the Cleveland Browns and Baltimore Ravens, is now a tenor honing his craft on scholarship at the Juilliard Opera Center in New York City. Just like his days as a professional football player, he is still performing for crowds, except now theyre dressed to the nines rather than in 49ers gear.

Drafted by the Cleveland Browns and then-head coach Bill Belichick (now a three-time Super Bowl champion with the New England Patriots), Pupua had to reassess his career in football after a nagging foot injury kept him off of the field.

Having studied music in college at Weber State, a time when he was not really thinking about a career, the move from the gridiron to the bright lights of the stage was not entirely an abstract one. Opera didnt come into my life until late in college, probably my senior year, Pupua said.

At the time, he was musically inclined but basically a raw talent with little classical training or experience. I just had the voice, I didnt really know how to read notes, Pupua said. I had the voice and that was about it.

A native of the Polynesian island of Tonga, Pupua moved to Salt Lake City with his family at age seven. Growing up, Pupua said his musical taste was far more mainstream, listening to hip-hop, R&B and rock music, but not opera.

So, rather than his soaring voice leading him out of high school, he capitalized on his other natural gifts, size and athleticism, as a college football player.

Judging from the reactions of coaches and other players, Pupua realized during his sophomore year that an NFL career was in reach. That career became a reality but, though promising, was short-lived due to a foot injury.

While he would have liked to play for another five or 10 years, there seems to be no bitterness or regret about his NFL careers premature end.

By the time he decided to make the switch from football to singing, Pupua already had a considerable set of tools most notably, discipline, concentration and breathing that paid off in both fields.

Singing is a physical thing. You must sing with your body, Pupua said. In sports you play with your body, and in the same way singing is very athletic. You have to train your voice every day, you have to do exercises every day just like in football.

Having traded in the weight room and drills that come with football for the scales and breathing exercises that come with singing, he is now gaining recognition around the country for his vocal skills.
Pupua worked with a voice teacher in New York for four years before catching his big break, the audition at Juilliard that got him his scholarship. As part of his study at Juilliard, he is learning to sing in French, German, Italian and Russian.

To date, he has performed for the King of Tonga on two occasions and been featured as a soloist with the Mormon Tabernacle Tongan Choir and other groups in New York City, Houston and the D.C. area.

This summer, Pupua is planning on going to Italy as part of a fellowship study.

This week, though, his considerable skills will be put to work with Maestro Kim Allen Kluge and the Alexandria Symphony Orchestra as he performs duets from La Bohme and Madame Butterfly with soprano Julie Rolwing.

If an early rehearsal in the piano room of Kluges home is any indication, Saturday and Sundays shows at the Schlesinger Concert Hall and Arts Center should not disappoint.

By then, you might wonder if more football players should look to the opera for a second career.