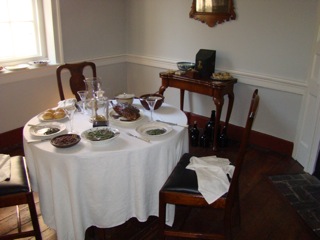 George Washington, John Adams, Thomas Jefferson and James Madison all spent many an hour dining, being entertained or sleeping at Gadsbys Tavern in the heart of Old Town. Now, thanks to the City of Alexandria, you can walk the same halls as our presidential predecessors.

Today, most visitors are usually part of a museum tour rather than a diner or lodger at the original Tavern. However, scores of people dine in the restaurant that was once part of the 18th century city hotel. Thus, after 223 years, Gadsbys Tavern at 134 North Royal Street is still an entertaining place to visit and it is yet another stop on the Old Town Passport to History.

Visitors enter Gadsbys Tavern Museum through the same doorway Washington and other Founding Fathers used at the time of the Revolution. Todays guests must first stop in the gift shop where the Tavern tour tickets can be purchased and information on upcoming activities at the museum is offered. The museum is actually two lovely brick 18th century buildings: one dating back to 1785, which is Georgian-style in architecture, and the adjoining newer 1792 City Hotel section, which was built in the Federalist style.

Enthusiastic guides make history come alive as guests tour the museum. One of the first facts visitors learn is that there were several owners of the tavern and city hotel site, with John Gadsby being the Taverns owner from 1796-1808. Only the two main buildings remain on the site, which once included a necessary, or outhouse, a kitchen, a stable, a wash house and a coach house. The Gadsby Tavern, City Hotel and outbuildings property stretched from North Royal Street all the way back to North Pitt Street.

Tours begin in the spacious dining room, with windows overlooking City Hall. The room is set with tables and food arranged to appear the way the room would have looked in the 18th century. The large fireplace would have had a roaring fire to help warm the room. Some of the patterns on the plates placed on the tables are recreated from bits of broken pottery found during archeological digs on the site.

The dining halls sideboard is laden with oysters, rockfish, peas, mushrooms, apples, corn beef and ham. These are traditional foods that would have been available as bill-of-fare for guests at the Tavern. One table has an 18th century lemon squeeze, sugar nippers and a 10-inch high sugar cone. Sugar cones were typically wrapped in blue paper to keep bugs out and the sugar came from the Caribbean Islands.

Guests paid money or bartered for their food and drink at the Tavern. Tobacco was a common item people exchanged for food. Tavern owners like John Gadsby used to save all the tobacco they received in barter and then would have it bundled-up for sale. Long clay tobacco pipes are scattered about the dining tables. This dining room would have been full of life, laughter and noise in its day. In addition to the voices of men discussing the days events or politics or business deals, there would have been the sounds of horses, people, carts and carriages coming from the cobblestone North Royal Street immediately outside the dining room window.

Across the hall from the large dining room is a smaller, quieter, more intimate dining room where Washington, Adams, Jefferson, Madison and Patrick Henry are all said to have dined. The fireplace makes this more modest-sized room cozier on a cold fall or winter day. Canvas-backed duck and hominy, two favorite foods of Washington, are on the table. George Washington had a townhome around the corner from Gadsbys Tavern, but it had no kitchen. Thus, he was a frequent visitor to Gadsbys Tavern when he was in town.

Visitors on the tour then move into the entry hall and up the original staircase to the second floor. Guides point out the tall, wooden coat pegs on a long rack that stretches down one wall. The coat pegs were high to accommodate the long winter coats. A leather bucket, which was used in the event of fire, also hangs from one of the old pegs.

Above the dining rooms on the second floor is the Assembly Room, where dances were held and entertainment was provided. Singers, slack-rope walkers and Toby, the intelligent pig, performed in the Assembly Room. Toby was a well-known 18th century pig that went around to various taverns and inns performing by selecting numbers or letters in response to questions.

One floor above the Assembly Room are rooms that guests lodged in when they stopped at the Tavern. Those who wished to spend the night would have asked for a bed or a bedstead. Most rooms had both options available. The bed was a straw-filled mattress on the floor where one could probably more easily smell the odiferous chamber pot that was typically found near the end of the bedstead. The bedstead was a mattress on a bed frame with strings holding the mattress up. A bedstead would hold two or three menusually strangers to each other. The term strange bed-fellows came from this idea that complete strangers had to share a bedstead. That terms origin is similar to another bedstead-related term that is still used today, Sleep tight. The strings, and therefore the stuffed mattress, sagged quite low to the floor if any of the men sharing the bedstead were too heavy. A contraption was often placed near the bedstead to tighten the strings which held the mattress up, and that is where the term sleep tight originated.

At the moment, the ballroom in the City Hotel section of the museum is not open to tours because the dance floor is being refurbished. Visitors for the next couple of weeks are not able to see the site of Thomas Jeffersons inaugural ball. This is the same hall where a famous 19th century singer and actress died during a performance, and the place where the George Washington Birthnight Balls are still held. The Birthnight Balls have been celebrated at Gadsbys Tavern most years since 1798, when Washington was actually in attendance.

Birthnight Balls started in Great Britain and were held to celebrate thebirthday of the reigning king or queen. After the American Revolution, George Washingtons birthday was celebrated in a similar fashion, according to various accounts. The first Birthnight Ball held at Gadsbys Tavern was in 1797, but Washington did not attend. He was in Philadelphia and busy serving the country as President at the time. However, Washington did attend the Gadsbys Tavern Birthnight Ball in 1798 and 1799. His diary entry for the day reads: Went up to Alexandria to the celebration of my birth day. Many maneuvers were performed by the Union Corps and an elegant Ball and Supper at Night.

Today, Alexandria residents and visitors can step back into time and enjoy the Gadsbys Tavern tour. They can also attend the Birthnight Banquet and Ball and experience the fun of an 18th century celebration just as George and Martha Washington did.

To dine at Gadsbys Tavern Restaurant, call 703-548-1288. There are a variety of other ways to experience Gadsbys Tavern: 18th Century Dance Lessons begin January 29 for those who want one to three lessons before the Birthnight Ball, or simply attend the Birthnight Banquet and Ball on February 14. There are also events for children and families including two 18th century swordplay demonstration days in February and March, and a childrens program known as Tavern Toddlers. To learn more about the purported Gadsbys Tavern ghosts, take the Colonial Tours Northern Ghost and Graveyards tour, which begins at the Alexandria Visitors Center on the corner of King and Fairfax Streets. Or, go to the Alexandria Archeology Museum on the third floor of the Torpedo Factory.