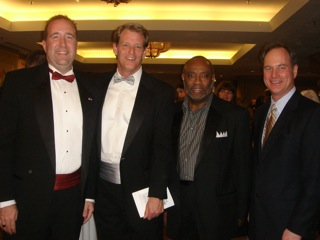 The Alexandria Chamber of Commerce celebrated the election of Cathy Puskar as its new board chair at the annual Chairmans Gala, held Saturday evening at the Hilton Mark Center.

Donley acted as auctioneer for a live auction at the end of the evening and announced the winner of a cruise to Key West and Cozumel, won by former Councilman Lonnie Rich.

Founded in 1906, the Alexandria Chamber of Commerce is one of the largest in the Greater Washington region, with 1,000 business members who employ more than 49,000 people.