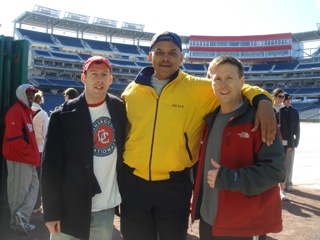 It wasnt exactly four score and seven years ago, but in the nearly three years that the Washington Nationals Racing Presidents have been around, they have become a national phenomenon and Sunday was the day many fans had been waiting for.

I decided about three years ago to try out, ever since Teddy riplined out of centerfield at RFK, said Duane, an Alexandria resident whose last name, like others who auditioned, must remain anonymous. My wife had been emailing the Nats about the auditions and the information was finally posted on their website about a month ago.

On a clear and cold afternoon at Nationals Park, 70 invitation-only hopefuls were given a chance to earn one of the coveted GEICO Racing Presidents slots for the upcoming season and Alexandria was well represented during the three-hour tryouts.

I have been a baseball fan from day one and now just seemed like the right time to audition, said Ric, a local actor who was just cast in The Little Theatre of Alexandrias upcoming production of Gross Indecency. Im trying to go 2-for-2 this weekend.

More than 150 people applied to participate in the tryouts. After submitting an initial questionnaire, 70 applicants, including an all-time high of seven women, were invited to come to the audition.
As the chosen finalists lined up in the Nat Pack room (the dressing and preparation room for the mascots and their handlers) at Nationals Park, each was given a pop quiz as well as a release form to fill out.

I think I did okay, said Ric as he awaited the next part of the competition. I may have gotten the 2005 home run question wrong but Im not sure.

Next, the presidential hopefuls took to the field and were suited up for the challenging part of the tryouts running in a 12-foot high, 45-pound costume.

Dressed as George, Tom and Abe (Teddy was unavailable due to his rigorous training schedule for the upcoming season), each competitor was individually timed running a 40-yard dash, and in groups of three, ran a simulated race from centerfield to the Nationals dugout.

The final part of the audition consisted of candidates demonstrating their best celebration poses and competing in a 60-second dance-off.

I didnt really train for today, added Ric, who is a marathon runner and suited up as George Washington for the tryouts. But I did get 20 minutes of dance lessons at a bar last night, so thanks to my friends at Ramparts.

Getting everyones attention was Allen, a Metro worker at Eisenhower Avenue, who auditioned while riding his unicycle. Ill either be a zero or a hero today, said the 65 Allen who looks like an NFL linebacker. This was a personal challenge for me, but it was also all about having fun.

The Racing Presidents first started in 2005 as an animated race on the scoreboard at RFK Stadium. They went live on July 21, 2006, when the Lerner family took ownership of the Nationals team (for trivia fans, the Nats beat the Cubs 7-6 in that presidential inaugural game).

Now considered a highlight of any visit to Nationals Park, the oversized mascots race during the 4th inning of each home game and were voted Best On Field Promotion of all professional sports for 2007 by GameOps.com (they are nominated again for 2008).

The presidential hopefuls wrapped up the day with a private interview and will be notified shortly if they made the cut. Secrecy and silence (no talking while in costume) were stressed, and everyone was admonished not to reveal their last names or let anyone know if they are one of 15-20 selected to appear as one of the Rushmore racing mascots during the 2009 season.

The balance was different than I expected, especially the head said Ric, who had an impressive day and finished well ahead of the others he was racing against. All you can do is be the best in your group and see what happens.