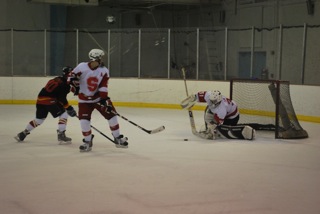 It came down to a gulf in class. Literally.

St. Stephens and St. Agnes, playing with 13 juniors and seniors, simply overpowered and outclassed a far younger Bishop Ireton squad with only six juniors and seniors en route to a resounding 9-0 win in the January 30 ice hockey contest at Mount Vernon Recreation Center.

After a pretty even first three minutes, during which each team managed a few shots on goal, St. Stephens opened the scoring at 11:11 of the first period when freshman Hunter Garth centered the puck to junior Stephen Upton who knocked the puck past Cardinals goaltender Phillip Spiess.

From there, the Saints never looked back, scoring three more goals in the next 10 minutes to make it a 4-0 lead with over two minutes left to play in the first period.

St. Stephens racked up 16 shots against Spiess in the opening period and continued to pepper the goal throughout, ending up with 40 for the game.

Bishop Ireton freshman forward Ben Gerke notched the games first shot, resulting in a glove save by Saints goalie Michael Smith. The Cardinals werent able to keep pace with the Saints, though, and finished the game with 28 shots, 11 of which came in the final period.

Saints coach Joel Layton said he was pleased with his teams performance, coming off of a two-week break in play. His teams edge in experience was a big boost, he said.

Having our older guys out there made it a lot easier for us to do the things we wanted to, Layton said. We were able to put pressure on them and didnt get lazy after we got ahead.

The Saints got two goals each from senior Alex Propp, junior Holt Mountcastle and Upton.

Following a first period with only one penalty Saints sophomore Peter Milley received two minutes for elbowing with 1:20 left in the period the game grew more spirited and each side finished with seven penalties, all two-minute minors.

Two of the Saints goals came on the power play during the second period, but the Cardinals managed to kill off the rest of their penalty time.

For Bishop Ireton, its not easy to sugarcoat a loss like that, but coach Tony DiCarlo said his young team put in a good effort against a much older team and stronger program.

We didnt give up, we continued to play, we didnt catch any breaks out there but the guys still played hard, DiCarlo said.

The Cardinals goaltender, Spiess, a senior, stopped a lot of St. Stephens first-chance opportunities on goal, and was part of a Bishop Ireton defense that DiCarlo said played well, all things considered.

[Spiess] stopped 30-plus shots, DiCarlo said. A lot of their goals were rebounds, two-on-zeros Im sure there are a couple of shots hed love to have back, but for the first period and a half he played very well, nothing was on him.

Layton said the Saints are hoping to carry some of the momentum from the 9-0 win over Bishop Ireton into IAC play over the next two weeks, with games against St. Albans, Bullis and Georgetown Prep looming large.

The Cardinals are striving for some consistency as they close out the last few games of their league schedule, DiCarlo said, something that is part and parcel of building up the hockey program.

Were trying to build back the program here, DiCarlo said of his Cardinals. I think [the Saints] have a pretty good model of what theyre doing, so were trying to get the players in here and get competitive, but our strength is also in our youth.