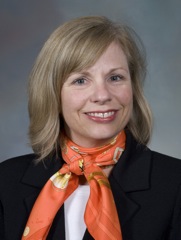 On Friday, February 6, look for Carrie Loveless to be dressed in red from head to toe. The Alexandria resident will be one of thousands from across the country participating in National Wear Red Day, a day to show support for womens heart disease awareness, a cause Loveless knows all too well.

In February 2008 I caught a Today Show with Laura Bush being interviewed by Ann Curry about women and heart attacks, said Loveless. The only thing that saved me when I had my heart attack one week later was that I knew the heart attack symptoms.

In her mid 40s, Loveless did not even consider heart disease as a possibility. There were no family risk factors, she exercised, ate right, was not a smoker and her cholesterol levels were within normal range. One morning while walking her dog, Loveless had a severe pain in her chest as if an elephant was sitting there and I could not catch my breath. Her left arm went completely numb and she had difficulty breathing. She was able to walk the mile and a half back to her home in a neighborhood near the Yokosuka Naval Base in Japan where her husband Bruce, a Navy captian, was assigned at the time.

I made it home, lay down on the couch and waited for the pain to subside, said Loveless. I tried to assess what had happened, and when the symptoms passed I was back to normal. The next day I was preparing dinner and the pain came back, and I thought, I dont have time for a heart attack. I sat on the sofa and the pain once again went away.

The next morning, while getting out of bed and putting her feet on the floor, the pain came back yet again, this time even worse than before. She went to the base hospital, was questioned, given an EKG, diagnosed with acid reflux and sent home with a bottle of Mylanta.

A little shaky from her experience, she parked herself on the couch and watched a movie. At about 6 p.m., the pain came back and Loveless called her husband, saying, Come home now. The base ambulance was not allowed to pick her up off-base so time was lost while Captain Loveless raced home, picked up his wife and took her to the base hospital. Hooked up once again to the EKG, something abnormal finally showed up. In her overnight stay, blood enzyme tests, repeated every few hours, finally revealed that she indeed had experienced a heart attack.

The base did not have its own cardiologist, so Loveless was transferred to a civilian Japanese hospital in nearby Yokahama. There, she had more tests, including an angiogram where a catheter was threaded through her wrist. I was not sedated and watched the procedure on the Sony monitors, said Loveless. I looked at my heart in 3-D with the four Japanese doctors who did not speak English and I spoke no Japanese. A Japanese resident did speak English and he told and showed me where an artery was 100 percent blocked. The artery was too narrow to begin with and the doctors decided to recommend drug treatment. I was released, with my DVD of the procedure, back to the base hospital where I was monitored overnight and then released again. After five weeks, I came back to Alexandria so I could be under the care of a cardiologist.

Loveless got the name of Dr. Susan Bennett, a D.C.-based cardiologist who specializes in womens heart disease. Through Bennett, she became aware of the Red Dress Campaign and WomenHeart, the National Coalition for Women with Heart Disease. I am currently on four medications for my heart disease and realize that I am at risk for another heart attack, said Loveless. This attack was a blessing. I was living footloose and fancy free and entitled to live into my 90s because my family had great genes. I know better now and every day is a gift.

As a result of her connection with Bennett and WomenHeart, Loveless was selected to attend a six-day Science and Leadership Symposium at the Mayo Clinic along with a cross section of American women who were heart attack survivors and interested in learning more about heart disease in women. Loveless is now a spokesperson for WomenHeart.

Heart disease is the leading cause of death for American Women. 2005 statistics reported by the Centers for Disease Control shows that one in four women dies from heart disease. It is the number one killer of women, regardless of race or ethnicity. It also strikes at ages younger than most people realize, with the risks rising in middle age. Awareness and knowledge are the keys to survival. Loveless might not be here today if she had not seen a segment on the Today Show on the symptoms of heart disease and known what to do.

For more information, visit www.womenheart.org or the National Heart, Lung and Blood Institute at www.nhlbi.nih.gov for information on heart disease, the Heart Truth campaign and the Red Dress symbol.