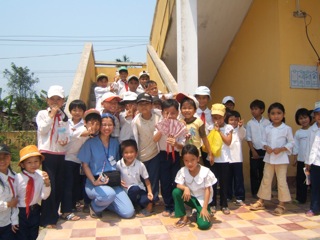 When Julie Tran left Vietnam 17 years ago, she did not expect that her first trip back would be as a dentist on a dental mission for the nonprofit organization Operation Smile. In 2005, I was volunteering at the Northern Virginia Dental Clinic at Baileys Crossroads. Some of my colleagues were involved with Operation Smile and they told me about a dental mission to Vietnam, Tran said, recalling her first involvement with the program. I volunteered, and in March of 2006 I was part of a team based in Hue, a city in the central part of Vietnam.

Returning to the country where she was born, Tran was among several volunteers who operated out of three mobile dental vans as well as a room at a clinic. The vans traveled to elementary schools throughout the region to provide free dental services to children, some of whom who were seeing a dentist for the first time in their lives. When we were in the van at the elementary schools, we were two dentists and an assistant, Tran explained. We started the day with oral hygiene instructions and gave each child a dental kit with toothbrush, toothpaste and floss. Some of the children had no toothbrushes at home and some had one that the entire family shared.

Any children that needed treatment, which was nearly all of them, became part of an assembly line. They were examined, a course of treatment was decided on, and with the aid of a little numbing, teeth were extracted and a stuffed animal handed over to ease the pain. With about 100-120 children being examined every day, the mission provided more than 2,300 children with dental treatment. Tran returned to Vietnam for a second dental mission in 2007 and is deciding what mission to volunteer for next.

Back in her Alexandria office at Del Ray Smiles, Tran encourages patients to bring their babies in sooner rather than later so that they become comfortable with a dental office as early as possible. The first exam is usually conducted on mom or dads lap and a healthy trust develops between the young patient and dentist.

Baby teeth are important for speaking and chewing and as a place holder for the permanent teeth, which come in when the child is about 6 years old, Tran said. The first teeth, often four little snaggle teeth in the front of the mouth, begin to erupt at about 6 months with the rest of the primary teeth in by about the age of 3. Taking good care of these teeth is very important. When I was in Vietnam, we did so many extractions because the baby teeth were in such bad shape, said Tran. Due to poor hygiene and malnutrition, the baby teeth were slow in coming in and were in the childrens mouths longer than they should have been. Many of the teeth had only partially come in and they were badly infected. We were not able to save those teeth.

February is National Childrens Dental Health Month and Tran stresses that developing good habits at an early age is the best prescription for healthy adult teeth. To take good care of a babys first teeth, the American Dental Association (ADA) suggests brushing with a little water as soon as the first tooth appears. If you are considering using toothpaste, Tran advises no fluoride until the child can spit. Most children should be able to dab a pea-sized amount of toothpaste on a toothbrush, brush, spit, rinse with water and spit again by the age of 6 or 7. The ADA also recommends using floss between any two teeth that touch, with brushing and flossing being done twice a day.

Most parents in this area are aware of good hygiene, Tran said. We work together to create good habits and have regular dental check ups.

Even as life expectancies are approaching nearly eight decades, with proper dental care beginning at an early age, there is no reason that everyones teeth cannot last a lifetime.