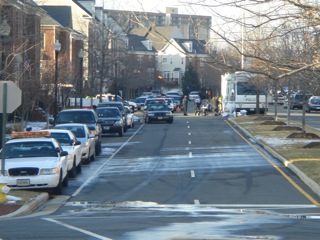 About 12 hours passed between the time James Downs shot a woman at his Cameron Station home and when police broke into the Waple Lane townhouse after hearing a gun shot at about 10:45 p.m. Thursday. Downs was found inside, dead from a self-inflicted gunshot wound to his upper body, Alexandria police spokeswoman Ashley Hildebrandt said.

At about 10:30 a.m. Downs shot Dominique Dunford, a co-owner of Cameron Perks Coffee Shop with the shooter, multiple times before she was found outside the home by police and taken to the hospital where she was treated for her wounds.

A two year-old child was in the house during the shooting as well, but was released to police by Downs uninjured.

Police have not released a definitive motive for the shooting, but when you have a crisis negotiation like this, there is generally some catalyst within the last 24 hours that put that person in that situation, said Deputy Chief Blaine Corle, who was on the scene for the vast majority of the incident. Whatever the friction between [Downs] and Dominique was what led to all this.

During the approximately 12 hour-long standoff, several police officers — crisis negotiators and special operations teams — cordoned off the affected area attempting to draw Downs out of the house safely and without injury. Police had phone contact with Downs for an extended period of time, officials said. Downs also periodically wielded a handgun from the houses balcony, in front of the hubbub of police.

Its just a lot of psychology to try to establish a rapport with the subject, Corle said. Thats a critical element.
The value of human life and the preservation of life is paramount. So when we go into these things, that is the absolute paramount goal protection of life.

Arlington County police officers relieved Alexandria units after several hours of negotiations with the shooter as part of a regional support agreement. It was Arlington officers who were on duty when a shot rang out, prompting them to break into the house where they found Downs dead inside.

Police would not reveal the specifics of their interactions with Downs but Corle offered: Sometimes for people, [negotiations] are about saving face or getting some assurance. For some the stakes are a lot higher. The best we can do is try to do everything we can to facilitate the situation, but the reality is, the guy with the gun in his hand is the one thats holding his destiny in his hand.

Cameron Station was thrown into disarray for a short while during the incident. Samuel Tucker Elementary School was on lock down for about an hour, and residents had trouble maneuvering around their own neighborhood.

I wasnt even allowed to drive, said Cameron Station resident Cortney Hungerford. I had to take a taxi to work and cops and media were everywhere. It was a crazy scene.

Some students in Alexandrias public school system were unable to get home from school because of the midday standoff. G.W., Hammond and T.C. Williams students were transported to Tucker Elementary School where they were reunited with their parents.