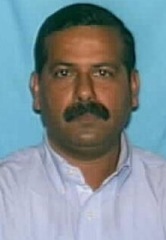 For Ali Qizilbash, getting back behind the wheel for work has been difficult not only depressing, but scary in the days since January 18.

That was the day he found out that his close friend and colleague, Khalil Saddiqi, had been found dead at the corner of Princess Street and Buchanan Street.

The murder occurred just after midnight, only two days before the inauguration and is even more startling because, according to Alexandria Police, the buildup to January 20 was much quieter than they had expected.
Police said they are looking at robbery as a possible motive in the case and that no witnesses have come forward yet. It is estimated that about $100 was stolen from the victim.

Siddiqi, 50, and Qizilbash, both emigrated from Pakistan and started working at the Alexandria Yellow Cab about five years ago.

In the time since, the two men grew close and were in nearly constant contact with one another on and off the job, making it even more trying now for Qizilbash to go about picking up fares around the region.
I could not get back to work for three days, and even after that I hardly worked the next day, Qizilbash said. Its very depressing.

Qizilbash last spoke to Saddiqi on the afternoon of January 17, and only found out about his friends death the next morning when another friend called with the news.

He was such a very, very nice man. He was always there, Qizilbash said. I feel as if my brother has gone away.

Saddiqi, the sole breadwinner of his household, lived in Fairfax County and leaves behind a wife and three children. Two of the children attend Thomas Edison High School while the youngest is in middle school, according to Kyle Summers, general manager of Alexandria Yellow Cab.
Between this case and an instance a few months before on Duke Street, in which another driver was robbed, many drivers try to avoid working at night, Qizilbash said.

Believe me, now, if I have to pick up someone, Im so careful, so careful, Qizilbash said. Im a lot more awake to what sort of people are out there and not afraid to pass someone if Im not comfortable.
Violence and threats of violence against cab drivers are rare in Alexandria, and no witnesses have stepped forward yet. But Yellow Cab is looking into having cameras installed in every vehicle, according to Summers, who began working at Yellow Cab two years ago.

While it is clear that Saddiqis death most directly and viscerally affects his family, close friends and fellow taxi drivers, it has also struck a chord with those who may otherwise never have known his name.

Two separate fundraising efforts to benefit Saddiqis family are underway. One, through Alexandria Yellow Cab, has raised more than $2,000, according to Summers. Donations to this fund can be made via PayPal, to [email protected]

The other effort, led by Patricia Figliola, a Del Ray resident, grew out of the relationship that exists between the proprietors of Old Towns restaurants and bars, their patrons and the cab drivers who help to get them home safe.

The patrons depend on the cab drivers to get them around and [the restaurant and bar owners] rely on the patrons, so its part of a symbiotic relationship, Figliola said. Old Town wouldnt be the place it is without the cabs.

Figliola said she found out about Saddiqis murder from another cab driver during a ride to Old Town on January 20 and was hit hard by the reality of the situation without knowing if Saddiqi had ever helped her get from Point A to Point B especially for the cab drivers who help Alexandrians get around.

Theyre so good to the people who ride around with them, and to have that happen it was just a big blow, Figliola said. I felt like the community should do something to help the family and to show the cab drivers solidarity, that we support them and we dont want to tolerate something like this.

The event being organized by Figliola was planned for February 2 at the Fish Market in Old Town, but will in all likelihood be postponed until Saddiqis family returns to the area after visiting family.