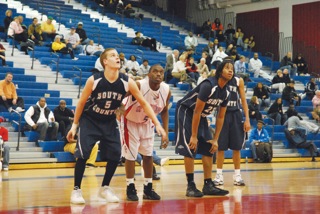 With the Titans final margin of victory where it should be big and comfortable for a team ranked fourth in the Washington Posts Metro Poll with a 21-2 record, you might think all was well moving on to the second round of the Patriot District playoffs.

The Titans, who never trailed, were pressing and passing from the start but there seemed to be something keeping them from pulling away sooner.
For King, that missing x-factor was all too clear.

There was no focus, no intensity, King said. We lacked consistent intensity, and didnt come out ready to play.

The Titans scored the games first basket when Edward Jenkins knocked down a jump shot from the left elbow 20 seconds into the game.

Darius Colbourn leveled the score a minute later for the Stallions, sinking a book shot from the right block after a great pass from Antonio Butler. The early 2-2 tie was as close as South County would get T.C. never trailed during the game.

It wasnt far into the second quarter when the Titans got into some foul trouble. King had to bench Jenkins, the Patriot District Co-player of the Year, and Billy Rowland, who had a big first quarter with four points and seven rebounds, after each were whistled for a couple of early fouls.

The slack left behind in their absence was picked up by senior guard Gavin Peterson, who sparked an 11-0 run with a leaning jump shot from 10 feet with 6:33 left in the second quarter.

Peterson followed that up with two more quick baskets in transition, as the Titans rattled off another nine points over the next minute to pull ahead 26-10.

The Titans led 38-18 at halftime, behind 10 points from Marcus Via and eight from Peterson.
While T.C. had clearly woken up to the game by then, it was the lethargic start that bothered King after the game.

Weve been going through this all year long, when we come out the first five minutes of the game and just sleepwalk, King said. Then the light comes on and they realize, Oh, weve got to play. If we dont come out and play on Thursday, were going to lose.

Kings players, who have experienced some incredible success in the last few years with the District unbeaten streak and last years state championship, echoed their coachs sentiments.

We didnt play very well this game, Jenkins said. I dont know what was wrong, we werent really focused I dont know whether it was because of the small crowd, but we didnt have the intensity.
Jenkins, forced to watch a good portion of the first half from the bench because of foul woes, said the substitutes came out with the energy needed to make up for the slow start.

Their energy showed the starters that we really had to play harder, which we did better in the second half, Jenkins said.

We still won, but it wasnt a pretty win for us, Via said.

Via led all T.C. scorers with 18 points in the game, while Jenkins had 14 and Rowland had 13. Butler and Gabe Jackson had eight points each for the Stallions, who end their season at 3-20.

King said Vias scoring picked up the team during the middle of the game and helped the team regain its energy on defense. But in spite of the win and the progress in the playoffs, the Titans will be returning to square one.

Were going to start from scratch in practice tomorrow, with our attitude, our defense and go from there, King said. Were going to go about it as if this is day one.