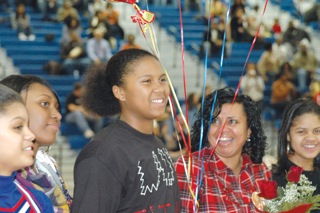 She had already locked up the number one spot in the T.C. Williams record books as the programs career scoring leader. Now, Tierra Ruffin-Pratt has #4 all to herself as well.

The All-Everything Titan senior had her #4 jersey retired Friday night during half time of the boys game, which followed the girls own senior night contest, an 86-49 win against Hayfield.

Its almost too fitting that she scored 40 points in the Titans rout that night, her final regular season home game. And, just as fitting as Ruffin-Pratts 40-point performance, all six seniors broke through into the scoring column.

With the bulk of her banner career full of hard-to-beat performances, for sure behind her, Ruffin-Pratt was the one getting one-upped this time around.

Unlike the countless passes shes anticipated and stolen from opponents, on Friday, she had no idea what was coming.

It was a big surprise, I wasnt expecting it at all, Ruffin-Pratt said.

The look on her face was priceless, Hagen said. I told her, I had it in the works for a long time, T. I had to keep it from her and told the correct people to make sure they could be there to share the moment.

With these successes behind her, Ruffin-Pratt has signed to play for the University of North Carolina starting next fall.

Her school record 2,300-plus points and counting did not come without plenty of hard work, something she and her coach admit straight away.

I tell everyone that shes the heart and soul of the program, Hagen said. Her work ethic, her attitude, her leadership surpasses any player Ive ever coached.

[Retiring her jersey] meant a lot, I put a lot of time and effort into the program really, I put my heart into the program, Ruffin-Pratt said, also adding that the programs success is due to the hard work of the other seniors, too, including Khalia Boston and Monica Fikes, both teammates of hers since middle school.

At the end of the sentimental day, though, the Titans leader displayed a bit of humility in the face of a cheering crowd.

The team and the fans were on their feet, hooting and hollering, cheers of Tierra, and she says, Coach, I didnt know I was liked this much, Hagen said.