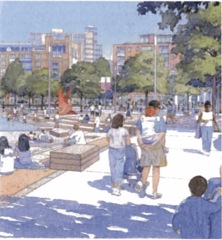 The area around Landmark Mall and the Van Dorn Street Corridor, a part of the city seen by officials as a prime locale for urban development, will be realized as a West End town center if all goes according a plan officially approved by the City Council at Saturdays public hearing.

After receiving a presentation from city staff and hearing input from residents during the public discussion period the Council adopted the plan with minor edits. Though the West Ends redevelopment has been on the mind of city officials, residents and business owners for years, the plan gained speed recently with numerous community meetings where stakeholders voiced their excitement and concern for the area, underdeveloped when compared to the east side of the city.

A new network of streets, two distinctive mixed-use activity centers and tree-lined transit corridors anchor the plan and environmental and economic sustainability are the themes throughout. But redeveloping Landmark Mall, a crux of the plan, is still uncertain because the city does not have dominion over it; it is owned by General Growth Properties, a developer out of Chicago.

The undoing of a mall is a very difficult process and we now find ourselves in a situation of even more perplexing times, said Greg Hamm, Vice President of General Growth. Its difficult to redo a mall because of the multiple ownerships, multiple leases; the legal entanglements are significant.

Hamm said the company was in favor of the citys efforts but could not offer an exact timetable on when the city could utilize the underperforming malls space, but said redevelopment is probably imminent.

Vice Mayor Del Pepper called the situation a stalemate, adding that the redevelopment is very significant for us in terms of our economic sustainability process.

The Landmark/Van Dorn Corridor Plan, as it is officially called, also nods at the need for a West End transit center while creating and maintaining a pedestrian-friendly area. Duke and Van Dorn Streets will become main transit corridors while new streets, Landmark Mall Main Street, Picket Place Main Street and Metro Street, will be added.

The grid of urban streets will be created over the long term as properties are redeveloped by their owners, the plan states. In the short term, pedestrian circulation can be improved immediately by apartment and shopping center owners who open up pedestrian connections through their sites to benefit their tenants and their tenants neighbors.

The staff presentation also included renderings of a new skyline visible from various areas throughout the city, from Interstate 395 to West End backyards. A height limit of 250 feet would be placed on high rises in the town center but would decrease to 80 feet as they get built closer to residential areas. There could be as much as one million square feet of office space developed throughout the corridor, adding ground-floor retail space and as many as 6,400 residential units.

While the plan has cleared a major hurdle it will be a work in progress for many years. Residents warned officials that as implementation begins and the areas physical and economic landscape changes, alterations and adjustments will have to be made to account for those changes.

During the course of redevelopment, keep in mind this plan will change to meet the requirements of the growing area, said Mindy Lyle of the Cameron Station Civic Association. She stressed the importance of both residential development along with retail development, noting that her community is experiencing too few residents to support the retail at Cameron Station.

Officials seemed to understand that as times change, so too will the plan, still far from the implementation process.

None of these things, at least up to this point, have been done in a vacuum, Mayor Bill Euille said when discussing the citys wish list in the area, from recreation centers to places of religious worship. I honestly believe the opportunities are still there to crack these things in at the proper time.