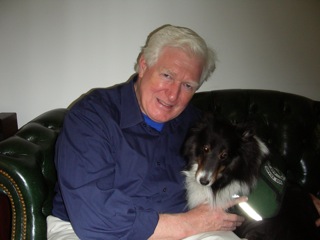 I was really excited to get a press release from the U.S. House of Representatives announcing that Elton Gallegly (R-CA) and my own congressman, Jim Moran (D-8) would co-chair the newly formed Congressional Animal Protection Caucus (CAPC). Moran is a good choice. He has been a tireless advocate for us non-humans and he was a member of the Friends of Animals Caucus, founded in 1989 which morphed into the CAPC. The CAPC serves as a lead dog in organizing forums and briefings to Congress on issues affecting animals and in the tracking of legislation.

Congressman Moran has weighed in on many issues concerning us and one of the most important is his work on behalf of farm animals. The quaint family farm with cows in the pasture and sheep grazing on a sunny, green hillside and chickens scratching in the yard has been replaced with squeeze cages, where animals are never allowed outside or even have enough room to make a complete turn. These are truly horrific conditions that are barbaric. In 2008 Moran co-sponsored two pieces of legislation relating to the treatment of farm animals. Factory farming is an outrage, Moran said. They are being treated as unit costs instead of as sensate animals. They were not meant to be pushed together where they cannot move around, fed in a mechanical manner and not allowed to function normally. This is a national disgrace, according to Moran, and there are some people who are so callous, insensitive and unreflective that it doesnt matter to them. The majority of people are just apathetic and unaware of what factory farming is and what is going on. When we abuse the animals in our care we diminish our own human character, Moran said.

Moran believes that these animal welfare issues are a personal issue that for many people transcends economic issues. He cited the comfort a pet can bring to a person in crisis or who is alone or sad, and he talked about the number of troops who befriend dogs and cats while in the field. These companions bring joy and comfort. We knew that!

In the 111th Congress, priorities include legislation banning the slaughter of horses. Currently, U.S. horses are being shipped to Canada and Mexico for slaughter to sell in foreign markets. Stronger regulations on internet sales of puppies and legislation requiring accurate labels on all fur products are targeted. Did you know that it is illegal to sell products in the United States made of cat or dog hair unless the product is valued at less than $150? That loophole is to be closed.

Animal Welfare League of Alexandria (AWLA) Executive Director Martha Armstrong was pleased with the news. I am glad to see that there is so much interest in Congress on humane issues, and to have our own congressperson involved is great news, she said at a PR committee meeting of the AWLA.

Both Armstrong and I have the same suggestions. Be aware of what is going on check in with the Humane Society of the United States and the AWLA to see how you can help. Write your state and federal government officials. Moran said that letters and calls do matter. Anytime I get a particularly thoughtful and articulate letter it influences me, Moran said. He also mentioned that letters have an effect on less involved state and local senators and representatives because they dont want to incur the wrath of people who do care.

So my dear readers, stay aware of the issues, make your voice heard, write letters and help create the change you want to see. If you are in the 8th Congressional District, please write to Jim Moran through his web site at www.moran.house.gov.

Keep your tail high and your feet dry, and write me at [email protected]