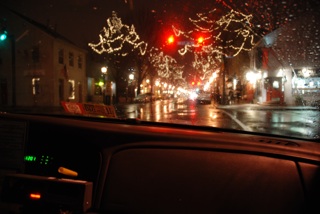 Driving a cab around Alexandria several nights a week is, quite literally, a world away from being a diplomat stationed in Moscow at the height of the Cold War.

Its also nowhere near Zimbabwe, Istanbul or Karachi.

Yet, after 32 years in the Pakistani Foreign Service 22 of those years spent abroad and 10 years as a tax specialist in the D.C. area, thats precisely what Shahzad Khan, 62, decided to do this January.

Growing tired of the disappointment and hard feelings that came with the downside (rejection inherent to his previous job as a car safety inspector) Khan wanted to occupy his time with something that allowed him to sleep well at night.

With a lifetime spent at various points around the globe and the people skills required by his work as diplomat behind him, Khan heeded his friends advice and went about the process of becoming a licensed cab driver. He passed all of the necessary tests by the end of last October, but didnt dive immediately into his new profession.

Rather, true to his cool-headed, deliberate nature, he waited until the first week of January to begin his new second job, or as he looks at it, his hobby.

Less than two weeks after that first night behind the wheel of his yellow 2003 Ford Crown Victoria, one of Khans colleagues at Alexandria Yellow Cab, Khalil Siddiqi, was killed in his cab on Princess Street. Siddiqis death was the first of the year in Alexandria and yet another harsh reminder of the vulnerability of cab drivers everywhere.

Khan is keenly aware of the potential danger he faces each night as he goes out to pick up fares. You never know what can happen in this business, he said, but as far as I know, if my time hasnt come and if I deal with people in the right way, then so be it.

While some parts of the city and the region are historically more dangerous and crime-riddled than others, if Khan is in his taxi and the light is on, hes not one to let a neighborhoods reputation keep him from doing his job to the fullest extent.

It doesnt matter, I will go everywhere, said Khan, driving to pick up a fare on Madison Street in north Old Town not all that far from where Siddiqi was shot a month and a half ago. I mean, there are some parts that people dont like to go, like this zone, which is dangerous.

Plenty of drivers are scared to go some places. I dont go even, intentionally, on top of [other fares], I dont go. But if somebody hops in and says, Take me to that area, then I have no choice.

Often, after being flagged down, he has only a few seconds to judge a situation in the darkness and, as principled as he is in accepting nearly all customers, its no easy task.

My thinking is that when Im working for something, I should accept everything, whether its a $4 call, a $5 call or a $50 call, it makes no difference for me, Khan said. The best thing is that I meet different kinds of people every day.

In his relatively short time as a driver, Khan said hes found that not all people are bad, and that many people are far nicer than he could have hoped. Thats not to say that there havent been times when Khan has had to take some less favorable fares.

He recalled a recent fare that took him from Alexandria to Southeast Washington, D.C., as an instance that was discomforting but ultimately turned out OK.
I got a person three nights ago, Khan said, and when he hopped into my cab he was high on some kind of drug he was definitely not drunk. So, my dispatcher called to see where I was and where I was going.

He was high, very high, and thats why my dispatcher was very much curious about me and then she called me on my cell phone and said, Put it on that channel and just leave it, dont talk. Keep talking to him and if something happens, Ill call the police immediately.

Eventually they arrived at the location in Southeast D.C. one Khan said was very dangerous where the passenger paid Khan the fare, plus a $10 tip, and said, Good night.

Khan said that his manager, Kyle Summers, and the dispatchers at Alexandria Yellow Cab are always cautious and care about their drivers, and that the protocol involved in his trip to Southeast D.C. is not at all unusual. They do it for everybody, they are very careful and care-taking people.
He said it is company policy that if a driver senses that something is dangerous or amiss, they should not pick up the fare.

There is a saying that prevention is better than cure, and I am a preventive person, Khan said. I try to prevent, I try to keep an eye out.

Riding along with him, this becomes quite clear. With each passenger he picks up, Khan makes an effort to be engaging and gracious in essence, the hallmarks of good customer service and has found that it is well worth it, making the ride more enjoyable for the passenger and himself.
According to Khan, no one has run out on a fare, and in some especially pleasant cases hes received unusually large tips just for being patient and considerate.

One night Khan drove an older, less mobile man to run errands around the area. The trip took nearly four hours and the fare ended up being more than $90. As the old man went to pay, he added close to a 60 percent tip an amount so large that Khan felt he had to ask if it was a mistake.
He said, You know what? You are a very patient person, you made the effort to help me, Khan said, showing that his patience really is valued.

He has found that driving a cab is a good job, a funny job. He is able to appreciate the straightforward, honest nature of working for a fare. What is on the meter is the bottom line, but if the passenger is 50 cents short, its not the end of the world.

In a life spent around the world, Khan recalled a cab driver in Berlin whose outlook on the profession ended up meshing with Khans own.

The German driver loved the job because of the freedom and independence it provided, both reasons Khan cited as selling points.

At any rate, though, its not worth letting worry get in the way of living.