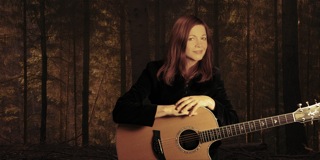 Singer and songwriter Carrie Newcomers days are packed. Its not that her day planner lacks a millimeter of free time, necessarily. Its just that on any given day, no matter how seemingly ordinary, she seems to find as many venerable ideas as there are hours between dusk and dawn.

Its her ability to find extraordinary things in an otherwise ordinary world that provides Newcomer with some of the fodder for her straightforward, lyrical style and straight-singing folk delivery.
One theme was this idea of finding whats sacred in an ordinary day, says Newcomer, describing Geodes, a song on her latest and twelfth album The Geography of Light. Its just about these funky, gray-brown rocks in Indiana that are everywhere where I live so theyre kind of common, but when you open them up, theres a crystal inside. And, well, I wrote a song about this idea that you cant always tell from the outside whats on the inside that something so common might be an absolute miracle.

Its Newcomers words that drive her music, not the other way around. But the strong strum of her guitar takes no back seat to her lyrics, enhanced by the poetry and prose she writes on the side (Im always writing, she says). She also teaches the craft, instructing creative writing workshops.

For some artists the music comes first and then they create language to go with it, Newcomer says.

Without pigeonholing her genre, Newcomer is a folk singer with Appalachian tendencies. Her music is thoughtful not having all the answers but asking a lot of good questions as well as thought provoking for the listener. The Geography of Light explores light and shadows in everyday life what is known and unknown while posing serious questions with what Newcomer calls a spiritual current. She sings about religion and spirituality, but in an inclusive way, not considering her music religious; its about the human condition, which includes religion.

A religious record label, a Christian label, probably wouldnt touch my album with a 10-foot pole, Newcomer jokes. But the good questions [about religion, spirituality and the human condition] continue to come back and we ask them and we ask them again. I think Im part of a growing number of people who dont want to put the sacred in such a small container.

Newcomer comes to the Birchmere March 7. She has not played the venue since it moved to its current Arlandria location but says she is familiar with the warm and listening audience for which the intimate venue is known.

Newcomers career has been anything but contained. She has performed on stage since 1980 with a multitude of artists. Her years as a singer, songwriter, poet and activist have culminated in the crisp, resounding sound emanating from her performances. She has also gained and portrayed a sense of humor as an admitted product of her own foibles.

As a song writer and as a poet, we can take ourselves so darn seriously, Newcomer says. People are so funny; were all so funny and the things we do add great balance to my music. Yeah, there are a lot of sorrows in the world and sometimes I write about that, but I am affected by the human condition and at the same time I find it endlessly amusing as well.

While the current human condition adds fodder to Newcomers influences, it has also taught her something that she will exhibit through her songs Saturday night at The Birchmere. As a folk singer, she used to view the glass as half full if for no other reason than thats a staple of folk singers. But I kind of dont believe the glass is half full or half empty anymore, she says. I just believe its a really big glass.