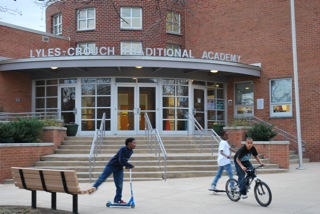 Several days later, School Board Chairman Yvonne Folkerts called it a perfect storm.
Whether the seismic or meteorological metaphor fits best is debatable the potential gravity and implications of the findings presented to the board is not.

Though only a fraction of the citys planned and approved development projects have broken ground in the tangible sense, current and expected trends in Alexandria point toward a marked growth in school and city population in the next several years.

About half of the elementary schools are already nearing capacity after ACPS experienced the biggest percentage increase in enrollment this past autumn of any school district in Virginia.

Septembers surge in enrollment caught school and city officials by surprise, prompting them to coordinate their analyses and review school capacity and how they plan for the future.

I was very shocked when we got so many of those students this past fall, Folkerts said. I dont think anyone expected those numbers to go up like they did.

That was a huge shock to have so many children coming in, but I thought we nailed it beautifully. That was a starting point for us when that happened we immediately worked with the city and got some of our administration people on planning committees.

The projected enrollment increase in the years to come would mean about 1,400 new students by the 2015 fiscal year, including almost 900 elementary-age students equal to more than one and a half elementary schools Assistant Superintendent Margaret Byess said during the presentation.

The city and the school population are going to continue to increase at moderate rates, but even moderate rates can produce heavy demand for additional classrooms, Byess said. Given our current programs, class sizes and trend information, over the next six years we will need significantly more classrooms to meet anticipated growth.

Accordingly, the effect that is felt first and strongest at the elementary school level will begin to impact the citys two middle schools, Francis Hammond and George Washington, around 2013 and T.C. Williams High School around 2015.

Complicating matters further, recent economic trends show that the primary funding base for ACPS, taxes, is also far less secure than years past.

Approximately three-quarters of all the revenue that comes into ACPS is based on sales, income and property taxes alone, said Robert Watling, ACPS budget supervisor. So you can understand that economic conditions are very important to the well-being of our students.

Watling went on to say that the rate at which tax revenues are projected to fall in the next few years will make budgeting for operational and capital improvement projects (construction) a much more difficult task.

For a city and a school system that is running out of room, the prospect of less and less funds being available to expand its facilities is trying, to say the least.

During the presentation to the school board, ACPS Education Facilities Director Mark Krause explained some of the options the school system has to expand.

The schools can free up some space by subdividing existing classrooms to create space-efficient resource rooms, but it is also likely that schools will need to expand, Krause said. To this end, ACPS is looking into possible major projects, including modular construction or entirely new, traditional classroom wings.

Of those two major options, modular construction would be the quickest to plan and execute, in addition to being less expensive, Krouse said.

Folkerts said she is anticipating seeing other creative ways that staff will devise to get the most out of the available resources. One program already underway involves turning computer labs into laptop carts, freeing those former labs to become new classroom space.

In light of increasing enrollments and tightening budgets, were probably have to think more creatively about how we use our existing space, Folkerts said. When we see those [enrollment numbers] starting to climb, were going to have to sit down and do that because construction isnt in the near term here.
The vast majority of the population growth Alexandrias population is expected to reach 170,000 by 2030, up from about 140,000 now, according to the U.S. Census Bureau is expected to come in the East End, as Potomac Yards and the Waterfront undergo development, and the West End with development in Landmark and Van Dorn, Byess said.

According to Krause, any school construction would probably occur at a West End elementary school before anywhere else.

It also seems, as with nearly everything else, the current economic climate is clouding the situation, making it hard to forecast when and how new students could be enrolling with ACPS. One possibility mentioned during the March 5 meeting was private school students switching to public schools due to financial constraints.

Economic conditions also account for population shifts, not just population shifts in and out of neighboring jurisdictions, but also shifts among public and private schools, Watling said. Theres anecdotal evidence to suggest that students are coming into public schools from private schools.
The climate has also led to fewer private development plans being pursued, approved and started, according to Deputy Director Karl Moritz of the citys Planning and Zoning Department. Only four projects have been approved since September, with things happening much more slowly due to the economic downturn.