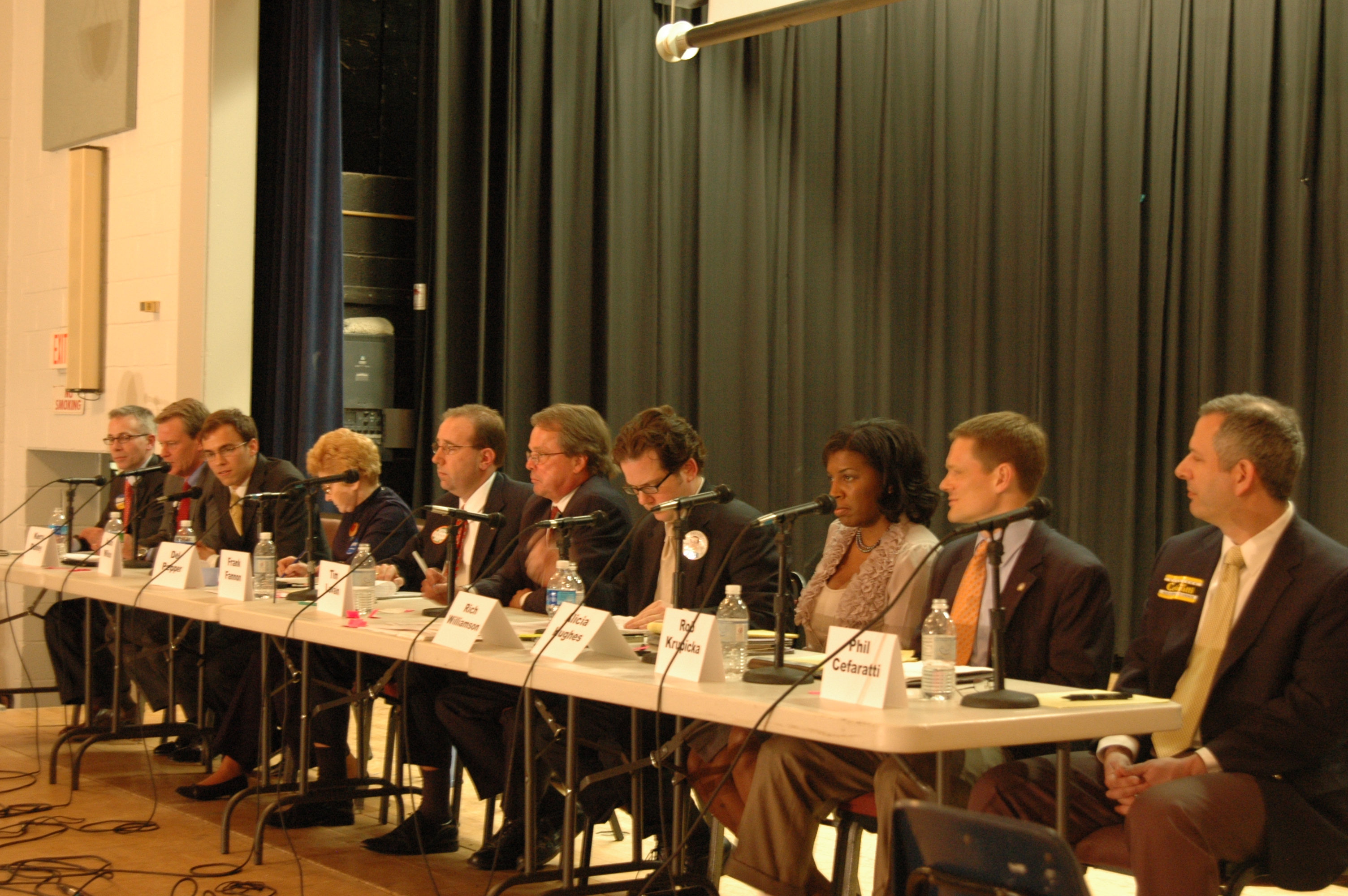 Six Democratic, two Independent and two Republican City Council candidates sat alongside each other for the first time at the campaign seasons initial forum Wednesday night, covering an array of issues facing the city, many of which will define the remaining 47 days of bidding for six available seats behind the dais at City Hall.

The format catered to the sparse crowd in attendance at T.C. Williams High School, Minnie Howard Campus who wrote down questions with answers continuously revolving around the economy, whether related to development, affordable housing or the candidates stance on the arts.

While the six Democrats are no strangers to the political scene, the Republicans and Independents made their debut as potential Alexandria politicos.

Cefaratti, a West End businessman, Gulf War veteran and former president of the Seminary Hill Civic Association, returned often to the notion that the Council needs varying perspectives to elicit progressive discussion. He said he agreed with much of what the Council has done, but would take some issues in different directions, like building and expanding partnerships with businesses and residents to subsidize some of the governments resources.

One of the things people have heard over the past year is change, Cefaratti said, alluding to President Barack Obama. He urged voters to keep the presidents message of party line crossing when they vote May 5.

Alicia Hughes, who works at the U.S. Patent and Trade Office as a pharmaceutical and biotechnology patent examiner, has a juris doctor in international law, health policy and international property curriculum, and is a member of the Alexandria Social Services Advisory Board and Leadership Alexandria.

She advocated more diverse expertise regarding land use and her experience as a former school teacher and Congressional worker. Hughes asked voters not to give great artificial deference to the lines that divide us and said her time working under New Mexico Governor Bill Richardson (D) taught her that no matter what the party, good public policy should not be overlooked.

A fifth generation Alexandrian, Fannon alluded to his familys business as among the oldest in the country. He stressed the importance of putting out a welcome mat for businesses and making Alexandria a destination for business, adding that the economic climate provides the opportunity.

Fannon also expressed his desire to offer a different viewpoint on Council because the Democratic Council does not represent a significant portion of the city. He also suggested that the city look into privatizing some of its services and programs.

Perhaps the most candid of the candidates was Rich Williamson. The former Tennessee school board member and senior project manager at the Pentagon specializing in business process engineering and system architecture called the current council an entrenched machine and spoke against expensive development projects that he said come at the cost of city services.

When will the development pay for itself? he asked. He added that Council members should measure decisions in quality of life dollars and urged that representation on Council should be divvied up by wards instead of a one-size-fits-all system.

The incumbents tended to reinforce the notions of their colleagues (Lovain and Pepper endorsed Donley) but displayed their individual beliefs and areas of expertise as well.

Wilson, the youngest member on stage (admittedly having only been on this planet for about three decades) championed his experience related to transportation issues as the chair of the Alexandria Transit Company Board of Directors and asked voters to note what hes accomplished in his short 20-month record on City Council as an indicator when they vote in May.

Lovain, too, emphasized his niche as a transportation and environmentally minded candidate who represents the city on various transportation-related boards, citing his push for streetcars in the city and asking residents to liberate us from the curse of the plastic bag.

Pepper said she has unfinished business on the East End of the city, referring to the Mirant power plant that she spent much of her terms attempting to shut down. She was also instrumental in getting the company to agree to $34 million worth of environmentally related upgrades.

Smedberg, who is known for his distinct style of discussion at Council meetings, stressed the importance of public safety, education and the health of residents, but nodded to his tendency to question the status quo of his peers.

I am running for reelection because I believe I have the understanding of the issues and abiding respect that results in good government for all Alexandrians, he said, adding later that voters should choose candidates who bring a balanced, thoughtful approach to deliberations.

Krupicka touched on a little bit of everything, as did candidates from all parties, stressing the importance of dealing with stimulus money responsibly without seeing it as a solution to our budget problems. A significant portion should go to social services suffering from the economy, like dealing with homelessness, he said.

Donley pointed to his 15 years on Council (half of it as mayor) to gauge his character and platform, citing the U.S. Patent and Trade Office he helped bring to the city, his dealings with the Woodrow Wilson Bridge project and realizing Tucker Elementary School on the West End. In one of the starkest exchanges of the debate he called the federal BRAC project coming to the West End a mistake, adding that priority should have been given to the Victory Center site because of its proximity to the Eisenhower Metro Station.

The first of five debates, the free-for-all was more nuanced than straightforward discourse. Candidates rebutted one another and agreed on issues across party lines. The next Council forum is March 26, at T.C. Williams High School, Minnie Howard Campus from 7 p.m. to 9 p.m. The topic is Social Issues and Nonprofit Organizations.