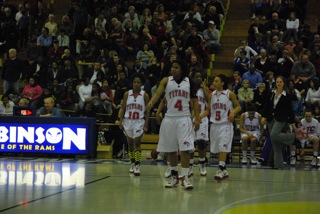 T.C. Williams came out gunning for two firsts in Tuesday nights Northern Region championship game: a first loss to hand the undefeated Oakton Cougars and an elusive regional title.Everything was on track until 5:33 in the second quarter, when senior standout Tierra Ruffin-Pratt left the game for good after sustaining what looked like an injury to her shoulder.
Instead, the Titans left with neither, as Oakton (28-0) won 74-66.

It was the Titans (24-5) first loss since before Christmas and they now go into the state tournament this Friday with a cloud of uncertainty hanging over their heads, not knowing the status of Ruffin-Pratt or her injury.

She said shes OK, but thats how she is. Shes always OK, you have to rip her off the court to take her out of the game, Titans coach Cavanaugh Hagen said. I know she did look at me like she wanted to go in again, but I knew her status and she couldnt risk that.
Hagen said its up to the doctors whether or not Ruffin-Pratt will play in Fridays opening round game in the state tournament

Ruffin-Pratt had 10 points in the first quarter, helping the Titans gain an 18-9 advantage through the games first eight minutes. Without her on the court it was a much different game for both teams.

Oakton capitalized on Ruffin-Pratts absence at both ends of the court, using a 15-5 run to build a 49-40 lead with 1:56 left in the third quarter. T.C. gathered themselves and countered with a run of their own, rattling off eight points in the last two minutes of the period and cutting the lead to one when Khalia Boston sank a 12-foot jumper with just four seconds left.

The Titans then went up 52-51 with 6:36 left to play, but were unable to maintain that momentum throughout the fourth quarter. Oakton put together a comeback of their own, outscoring T.C. 25-18 during the final quarter to secure the win.

I think trying to see the other four or five or six of them, the whole team step up and fill that void its a big void to fill, Hagen said. If Tierra were our only go-to player, then wed have lost by 40. But we came back and they didnt give up the whole time.