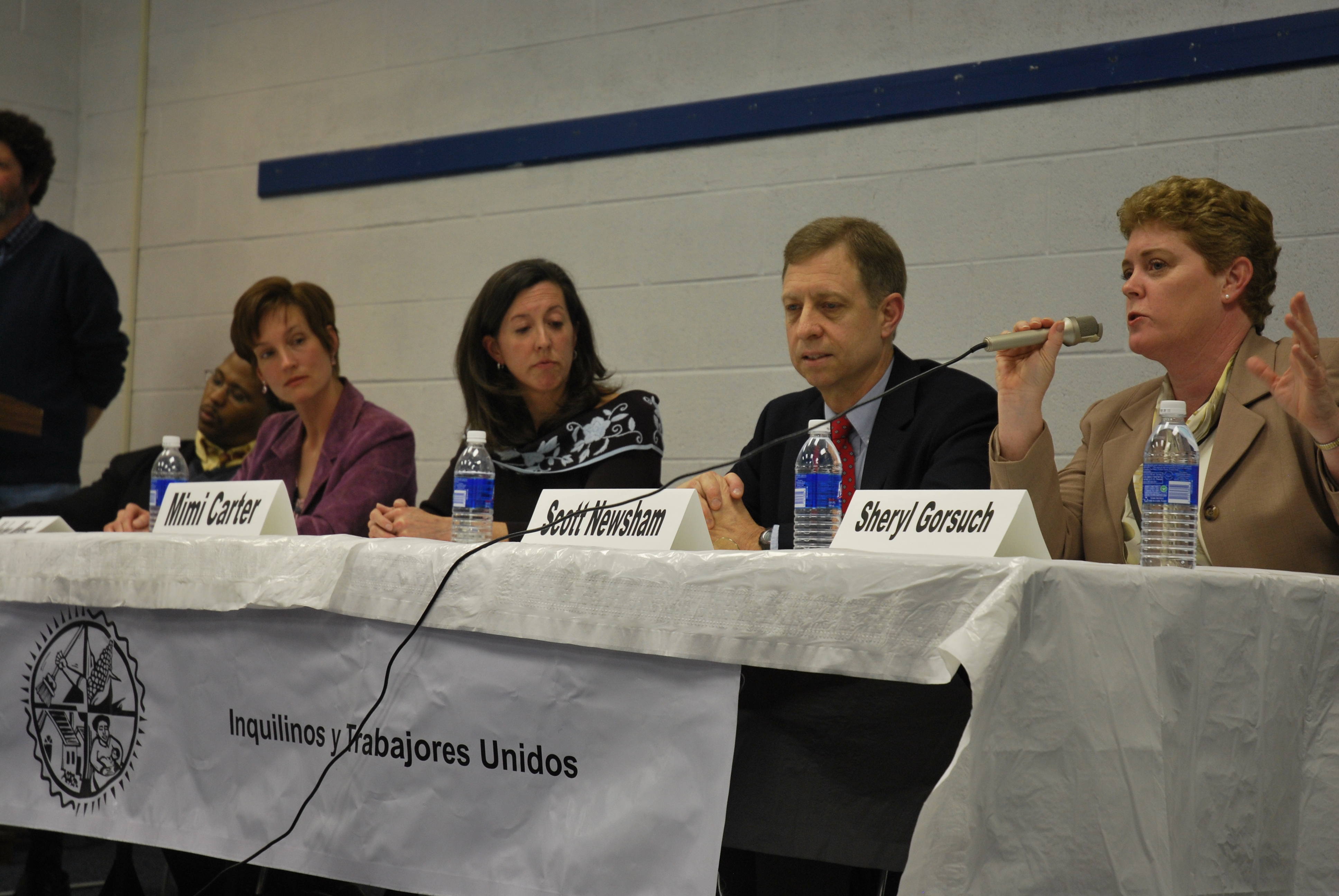 It only took about five minutes before the persistent achievement gap in the Alexandria City Public Schools came to the forefront and the citys school board election season began in earnest.

The achievement gap the gulf in graduation rates between white students and minority students in Alexandria, which the current ACPS board and senior staff has addressed several times over the last few months was the central theme of the questions addressed during the Tenants and Workers Uniteds public forum Wednesday night at Cora Kelly Elementary School.

The five District A school board candidates (Helen Morris, Mimi Carter, Bill Campbell, and incumbents Scott Newsham and Sheryl Gorsuch) answered each question in turn, some open-ended and others requiring a not-so-simple yes or no.

While some of the candidates shared similarities in their approaches to cutting the achievement gap, each had their own take-home message.

The biggest way to make a dent [in the achievement gap] is on improving the engagement of everyone involved, especially families, Campbell said. The way to improve the engagement of families is through improving our communications We need to go out and meet families and parents where they are.

Campbell went on to stress the importance of cultural competency and having the community firmly believe all students can achieve.

Morris stressed the importance of coordinating the relationships inside and outside of school and that the school system needs to be willing to meet the community part of the way.

Education needs to be a partnership between parents, teachers and the children themselves, and if there is, and theres a good roadmap, then our children will succeed, Morris said. It involves rigorous academics, community involvement in education and it involves character education.

Carter keyed in on accountability within ACPS and the need for a solid foundation from which to go about improving achievement among minorities and English language learners.

If we dont have a system set up for our teachers to engage with our parents, the best communication system in the world will not work, Carter said. We really need to figure out how to set up these very basic things like translation services, bilingual staffing in the schools, start there and then set up a more systemized approach to engage parents.

Newsham, an incumbent, reiterated what he would continue to do as a school board representative, setting policy and obtaining the necessary resources for students to be successful, something that starts with the pending strategic plan and continues with high expectations in a rigorous curriculum.

I think the best way to close the achievement gap is to implement the strategic plan that the board has spent the last six to nine months developing, Newsham said. Within the school system over the last three years we have come to realize that there is an achievement gap, that it is a serious situation and that we have the means to address it.

As the other incumbent in District A, Gorsuch said that the board needs to really analyze the data on the achievement gap, discuss the issue, and look at the issue as early as preschool.

I think that the achievement gap happens before our students even hit school, Gorsuch said. Preschool is going to be an important part of our future discussions in the school system.

The predictor is there, we know that kids who dont pass the third grade [Standards of Learning] test are generally the ones who dont have preschool and that predicts a high probability of dropping out later.

TWU organized the forum as a venue for community members to get to know who the candidates are and come away with a better understanding of their thoughts on issues that most closely affect the black and Latino community in Alexandria.

Right now, what were looking for is to see what each candidate stands for, said Evelin Urritia, lead organizer of Alexandria United Teens, the youth branch of TWU. The group does not know yet whether or not they will choose to publicly endorse any candidates based on their stances.

There are six more forums currently scheduled before the citywide election on May 5.

The Special Education Advisory Committee is holding the next scheduled public forum for all candidates on March 31 at Minnie Howard, with the time yet to be determined.

The Alexandria PTA Council will host three forums, one for each district: the District A forum is planned for April 22 at Mt. Vernon, District B on April 20 at Minnie Howard and District C on April 27 at Samuel Tucker. All of these forums are slated to begin at 7 p.m.