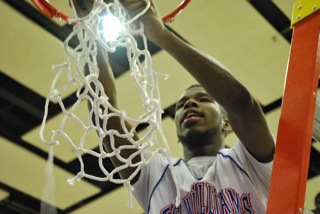 When the ball was sent inbounds to start the fourth quarter on Tuesday night, the Streak was all but on its deathbed. The multi-year run of consecutive wins against Patriot District foes looked like it was about to expire.

Eight minutes later, though, it was very much alive as T.C. Williams (27-2) celebrated its 59-52 comeback victory over Hayfield (21-7) in the Northern Region final. After Tuesday night, its been 71 games since theyve last lost to a team from the Patriot District; in that span theyve also gone 90-3 against teams from the Northern Region.

The win picked up the spirits of the T.C. faithful who saw the girls squad lose their championship game earlier that night.

The Titans dug themselves out from under a deficit that they carried through the second and third quarters, pressing more aggressively and scoring baskets in transition.

We took a little, piece by piece, said senior guard Gavin Peterson, who had 14 points off of the bench. Then we came out full-court and trapped them, got and-ones, made some clutch free-throws. We love to do this.

Peterson and his fellow senior backcourt partner, Edward Jenkins named regional Player of the Year at halftime picked up the Titans in the fourth quarter and helped catalyze a 26-16 run during the games final period, turning steals into fast break points as T.C. switched to their press.

[Hayfield] wanted it more than us at the beginning, they came out in our face we were playing like it was any little game, not like it was the Northern Region championship game, Peterson said.
Jenkins and Petersons senior leadership has been invaluable throughout the season for Titans first year coach Julian King. Jenkins led the Titans with 18 points.

Theyre irreplaceable, King said. I just love those guys to death, they bring all their heart and energy every game and just dont quit.