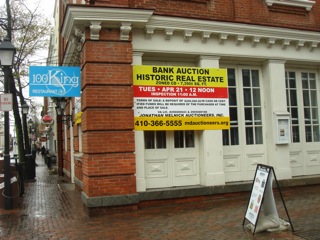 After years of renovation and attempts to strike up financial success, 100 King LC, the company that owned the building at the southwest intersection of King and Union Streets, had seemingly found a buyer to take the property off of its hands.

A voluntary sale auction held December 12, 2008 on the site resulted in the sale of the building to Douglas Development Corp. of Washington, D.C. for $2.4 million, according to Peter Mallios of 100 King.

The deal for the property was set to close on March 13.

A new debt record for $250,000 held by Genops Construction for the property from January 2006, one that went un-recorded with the city until March 12, 2009, according to court records, has led the other lenders with claims against the property to foreclose, apparently dissolving the December sale agreement and bringing about a new auction set for April 21.

I had hired an auctioneer to sell the property and Douglas was the high bidder and we signed a contract, Mallios said of the December proceedings.

What happened was that someone who had done some work on the property in the past put a lien on the property because we still owed them money, he said. In order to wipe out the lien, the bank is now doing a foreclosure auction.

Before the city recorded the new lien, the deal appeared to be as good as done.

The buyer has been ready, willing and able to go to closing. The seller has since experienced issues that have resulted in a decision by the primary first-trust lender, BB&T Corp., to proceed to a foreclosure, said Michael Chamowitz, the legal representative for Douglas Development at the December sale.

Im not convinced that that is going to happen anytime soon, he said. The buyer also has several other attorneys who are now reviewing their options with respect to what has occurred and those lawyers are expected to take some action between now and Tuesday to protect the buyers interest in the property.

100 King had taken ownership of the historic building, built in 1871, in 2002 for $2.1 million.
Since that time, existing debt on the property has increased to nearly $4 million in secured claims roughly $2.7 million of which BB&T bank held as the primary debt and another $2.1 million in unsecured claims. The owners of 100 King St. filed for bankruptcy in March 2008.

The bankruptcy filings were withdrawn in November 2008, according to Mallios, and 100 King and its lenders agreed to sell the property at an owners auction in December.

If I didnt agree to do the auction in December, they could have foreclosed then, so we tried to make it happen a little faster and it didnt end up working out, Mallios said.

The amount owed to Genops was included in the bankruptcy disclosure, Mallios said, but had not been recorded with the city before the sale in December.
As per the order of the recorded debts, the new lien held by Genops Construction would be the last of the secured debts to be paid off. In order to pay off all of the now-recorded, secured debts, close to $4 million would need to be raised at Tuesdays auction, noticeably more than the going price in December.

The other lenders had approved the December sale and announced that they were willing to take less than the total amount owed.

According to the bankruptcy disclosure, 100 King owed the City of Alexandria $38,810 in taxes, a primary trust to BB&T worth almost $2.7 million and had an outstanding loan with the Business Finance Group worth just over $1 million.

It is still unclear why the $250,000 lien, adding to the propertys total debt, was filed three years after the services were rendered.

Attempts to reach Geary Simon of Genops in order to ascertain why the debt was recorded with the city three years after it occurred were unsuccessful before going to print.

It is a peculiar situation, Chamowitz said.