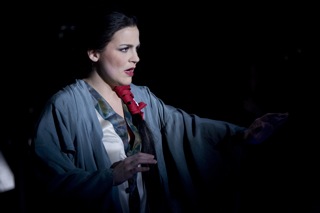 Each plays a part in the complex and contradictory version of events that leads to murder in Michael John LaChiusas See What I Wanna See, a haunting whodunnit now playing at Signature Theatre.

In a trio of intriguing vignettes based on three short stories by Ryunosuke Akutagawa, See is a musical about the often blurry line between truth and lies and opens briefly with two lovers in medieval Japan each plotting the honor killing of the other.
The story moves quickly to New York in the 1950s for a first act based on Akutagawas In a Grove, considered among the greatest in Japanese literature and the basis for Akira Kurosawas cinematic masterpiece Rashomon.

Inspired by Kurosawa, five-time Tony Award nominee LaChiusa sets Sees first act in Central Park where a businessman has been discovered brutally stabbed. But who committed the murder and why?
Told from four different viewpoints, the riveting tale unfolds as a thief (Matt Pearson), a janitor (Bobby Smith), the businessmans wife (Rachel Zampelli) and even the victim himself (Tom Zemon) reveal their own shaded versions of the truth.

Did the thief confess in order to gain his own bit of sordid fame? Did the lounge-singer wife act in desperation and shame after her husband witnessed her rape by the thief? And what about the simple-minded movie house janitor who slowly reveals his own version of events that led to his discovery of the body? As each exposes their own perception of what really happened, the truth becomes ever more elusive.

Playing the illicit Japanese lovers and doomed 50s couple are Zampelli (in a role originated on Broadway by Idina Menzell of Wicked fame) and Zemon, fresh from his brilliant performance as Javert in Signatures production of Les Miserables.

But while the first act provides more questions than answers, it is in the second acts Glory Day in which both the actors and script come together.

Based on Akutagawas The Dragon, La Chiusa has penned a haunting meditation on faith that centers on a disillusioned priest (Smith) who perpetrates a hoax in the aftermath of 9/11 in present-day New York. It is here that the talented cast and orchestra are at their finest, with powerful songs like There Will Be a Miracle and Rising Up providing a finale that ties the seemingly random vignettes together.

Smith, a Broadway veteran known to local audiences for his hilarious performance in Musical of Musical: A Musical at MetroStage, is riveting in his role as the priest who has lost his faith and decides to play a practical joke by promising a miracle on a particular Tuesday afternoon in Central Park.

His atheistic Aunt Monica (Channez McQuay) has always believed that religion is the greatest practical joke of all, yet in the end the hoax reignites the faith of not only the priest and his aunt, but of a CPA-turned homeless man (Zemon) and self-centered actress (Zampelli).

McQuay, a Helen Hayes award nominee for her role in the Toby Theatre production of Ragtime, is underutilized in the first act as a psychic but gives a stellar performance as Aunt Monica in delivering two of the shows strongest numbers; The Greatest Practical Joke and There Will Be a Miracle.

Pearson, who gained local fans for his performance in Jonathan Larsens tick tick BOOM! at MetroStage, is also stronger in the second act as he plays a TV reporter assigned to cover the promised miracle.

Nothing is as it appears to be in See, a show that was named one of the Best Musicals of 2005 by New York Magazine and nominated for nine Drama Desk Awards, including Best Musical. It is thought provoking and mesmerizing, and a reminder that, as Demosthenes said, Nothing is so easy as to deceive ones self; for what we wish, that we readily believe.

See What I Wanna See is playing now through May 31 at Signature Theatre, 4200 Campbell Ave., Arlington. For tickets or more information, call 703-820-9771 or visit www.signature-theatre.org. (This production includes mature themes and is intended for adult audiences only).