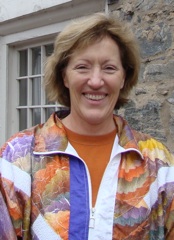 What do the Nixon White House, the U.S. Navy, the American Red Cross and the Girl Scouts all have in common? Alexandrias own Marty Evans.

Although her father was in the Navy when she was growing up in North Africa, retired Rear Admiral Marsha Marty J. Evans never imagined herself joining the armed forces, let alone rising to become the highest ranking woman in the U.S. Navy. When she retired in 1998 after more than 29 years of service, this Alexandrian didnt stop giving of her time and seemingly boundless energy to her fellow Americans. Indeed, Evans went from the Navy to head up the Girls Scouts of the USA and then the American Red Cross. Today, she spends her time serving on public and private boards, does a great deal of public speaking about leadership and philanthropy and enjoys a more relaxing pace of life with her husband, Jerry, a retired Naval aviator. Clearly Evans is doing something right because the nearly six-foot-tall, slim, athletic 61-year-old barely looks as though she is even 50.

As a child, although Evans dad was in the Navy, they were not a typical Navy family moving from place to place, and they elected to stay in southern California when her father retired from the military in 1961. While attending Occidental College in Los Angeles, she decided to pursue her interest in Asian history and politics and go on to graduate school with the intent of becoming a professor. Since Evans was going to be paying for graduate school herself, she decided to sign up for a brief stint in the Navy, with an eye on taking advantage of the G.I. bill to help underwrite her postgraduate tuition.

After two years, Evans signed on for more time in the Navy, which turned into nearly three decades. During that time, Evans witnessed history and made history herself. She was a White House Social Aide during the administrations of Presidents Nixon and Ford. She particularly remembers the time when the Watergate hearings were being conducted. Those were the days when security was not as tight, and we just showed our passes at the White House gate, and pulled up to park in the driveway, Evans said. We used to watch the Watergate hearings on TV in between meetings and social functions. Pat Nixon had an amazing, calm quality about her in the midst of all of the stress. It was often surreal around the White House in those days.

Evans recalled the change in mood when Nixon eventually resigned. As soon as Vice President Ford became President, it was like a huge weight was lifted. There was relief and the long national nightmare was over. At the end of Nixons presidency, invited guests would leave White House dinners quite early, and at the very first dinner the Fords held, everyone stayed late and seemed to be far more happy and relaxed.

As a White House Fellow from 1979 to 1980, Evans was assigned to the U.S. Treasury Department during another tense period in Washington when the Iranians began pulling assets out of the United States. The U.S. responded by freezing Irans assets during the Iran-U.S. hostage crisis.

In the late 1980s, Evans became the first woman to command the Naval Station at Treasure Island in San Francisco Bay. She was also the first woman to command the Naval Postgraduate School in Monterey, Calif. Both were extremely nice postings and yet challenging. Evans career challenges also came in the form of trying to find 70,000 young men and women who would like to join the Navy when she headed Naval Recruiting in Washington.

In 1998, Evans retired as only the second woman to be selected for two-star rank when she was promoted to Rear Admiral. Her next command was the Girl Scouts, the second largest association of girls in the world. Although one in nine American girls were in scouts when Evans took the helm, the number of girls involved with scouts from the inner city, particularly Hispanics and African Americans, was extremely small. She made it a goal to increase the diversity, expand the Girl Scouts appeal beyond Americas suburbs and reach out to girls who had not otherwise been involved.
Having made an impact in leading the Girl Scouts for four years, Evans jumped at the chance to head up the American Red Cross when she was asked in 2002. The next few years proved to be some of the most difficult for the Red Cross. The 2004 hurricane season was especially harsh with seven hurricanes making landfall along U.S. coastlines. Hurricane Katrina then hit in 2005 followed closely by Hurricanes Rita and Wilma. Katrinas havoc left 1.3 million American families needing significant assistance, a number far greater than the 75,000 U.S. families the Red Cross assisted during the 2004 hurricane season. By December 2005, Evans was ready to pursue a quieter life and stepped down from the Red Cross to serve on various nonprofit and public company boards.

But then the presidential campaign of 2008 sucked Evans into its vortex. I had always been fascinated by presidential campaigns and it was exciting to be involved in this past race, Evans said. Initially, I gave a few speeches on behalf of Senator McCain and before I knew it, I was on the campaign bus traveling with fascinating people like former Vietnam POWs who were at the Hanoi Hilton with Senator McCain, and people like Governor Sarah Palin. Regardless of your political views, Palin is an interesting, hardworking, engaging person. I loved speaking and meeting the people who turned out at the McCain campaign rallies in Virginia, Florida, Colorado, Kentucky and Pennsylvania.

Evans added We worked hard right up until Election Day, and now the election is over and its time to support our new President even if you didnt vote for him. It is in everyones interest for the nation to work together to get through this tough time in the economy.

For over 40 years, Evans has given of her time and talents in many different capacities, and now she is thoroughly enjoying serving on the boards of such companies as Weight Watchers International, Huntsman, North Highland and Office Depot. The work as a board member is not always smooth in the best of times. Evans is also on the board of Lehman Brothers, which is stressful and not a subject that she is permitted to speak about during this tumultuous time in the company.

Nonprofits have tapped her talents as well and she serves on the boards of the U.S. Naval Academy Foundation, which raises money to support education of midshipmen beyond what the federal budget provides, and the Ladies Professional Golf Association. An avid golfer, her husband Jerry particularly enjoys the LPGA board meetings in prime golfing sites. Free time, now that she is retired from a full-time job and the presidential campaign is over, means that Evans can do a bit of needlepointing or ski or golf with her husband.

Life is good even if I am doing a lot of speaking and still attending lots of meetings, Evans said, and Alexandria benefits from those like the humble Evans who have been willing to sacrifice their time and talents to serve our country.