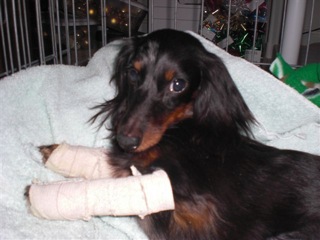 April is a busy month for the earth in this part of the world. Spring is here and all the trees and flowers are showing their stuff. Earth Day is on April 22 and the Alexandria celebration will take place at Ben Brenman Park on Saturday April 25 from 10 a.m. until 2 p.m. The theme this year is alternative transport. Buy a tree at the annual Earth Day tree sale. You know how much we dogs love trees. Sitting under a shady tree watching the world go by is one of our favorite pastimes.

This is the month to celebrate the life of Rachel Carson, author of Silent Spring.

Ms. Carson wrote about the wonder and beauty of the living world and saw that human beings are but one part of nature, distinguished primarily by their ability and power to alter it. Silent Spring reminded humans that they too were vulnerable to the damage caused by DDT and other pesticides.

This is also Prevention of Animal Cruelty Month. In these times of economic distress there has been an increase in mistreatment towards animals. On April 3, Animal Control was called to assist code enforcement officials at a condemned house here in Alexandria. When they arrived they found more than 50 snakes, several lizards, and more than 150 mice and rats. The Animal Welfare League is now caring for these reptiles and mice and rats. The numbers are growing, as will the animals. There were 175 (mice and rats, that is) at the time of the press release. Charges of cruelty to animals have been filed.

I got an email from Sandy Park, a member of the Dachshund Rescue of North America, about one of their rescues. Kelsey, a three year old black and tan Dachshund came to DRNA from North Carolina where he had been in a house with way too many other animals.

He was a mess, had severe kennel cough that morphed into bacterial pneumonia within a few days of being placed in foster care. He almost died. As he began to recover from the pneumonia, he was checked over a little more thoroughly and whip and tape worms were found. Kelsey also has hip, leg and back problems. They have splinted his front legs and will later decide if surgery is necessary. The poor kid also has an inguinal hernia that will need repair.

Kelsey had lived in the house of a hoarder people who collect animals but often do not take good care of them. Like in Kelseys case, hoarders may believe that they are protecting an animal from being out on the street. Hoarders, or collectors, exist in almost every community and they hoard just about every type of animal. Cats are the most commonly hoarded. Remember the case in 2005 in Mount Vernon where 488 cats — 222 of them dead — were found? Most of the living ones were so wild and so sick that they had to be euthanized. We will really never know how much of this is going on because the hoarders often become isolated and do not talk about the number of animals in their homes. Ms. Kneuven (who had the 488 cats) seems to hold the local Virginia record for hoarding — a rather dubious honor.

A few years ago the Hoarding of Animals Research Consortium (HARC), formed in conjunction with the Tufts Center for Animals and Public Policy, Boston University, Northeastern University, Smith College and the Massachusetts Society for the Prevention of Cruelty to Animals, was created to study the phenomenon. Seems that people who hoard are out of touch with reality and it is a real mental disorder.

My final thoughts today are to ask you to consider adopting a pet that, through no fault of their own, is now in a shelter; to reach out to neighbors who may need an assist with providing food for their pets; and to give your own beloved pet companions a hug.

Keep your tail high and your feet dry. Keep sending me your stories and thanks to Sandy Park for telling me about Kelsey. I wish him well.