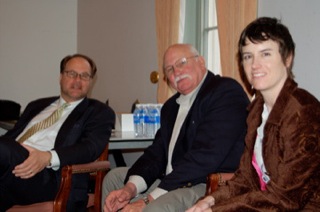 After M. Joseph Reef, of Coldwell Banker in Fairfax, won his Energy Smart Real Estate Specialist certification, he decided to practice what the instructor Candace Lightner of Alexandria had preached during her class at the Lyceum this past March.

Having learned how to help his clients reduce their energy usage and the resulting energy bills, he said, It made me think of what I could do for my own home.

He started by unplugging his lamps and appliances, rather than merely turning them off, when they were not in use.
And that has cut my energy costs by 20 percent, he said.

Another student, Randy Morrow, of Keller Williams in Arlington, had earned an eco-broker designation before attending the ESRES program.

But I never thought that it was enough to take only one class, he recalled. Following this one, Lightner helped him to update the insulation on his own 1928 home.

I am also thinking about a solar or tankless water heater, Morrow added. I learned a lot about them in her class.

Another alumna is Lyssa Seward, who works with Lightner at the Coldwell Banker Residential Brokerage office in Old Town. For Seward, the most useful part of the course was the home energy audit, as explained by one of the local speakers, Lee ONeal of CGE Solutions. Last year, Lightner had an audit done on her own Old Town home.

Also from CGE Solutions, Kelly Ross described the certification program for Energy Star homes. Sponsored by the Environmental Protection Agency, the designation can be given to houses that are 20 to 30 percent more energy efficient than standard buildings.

From the Preferred Mortgage Group, Skip Yanick focused on the Energy Efficient Mortgage program. It can add up to $8,000 to the mortgage loan, subsidizing energy improvements.

Lightner started her certification program, based on a survey of her fellow realtors, last year.

They wanted more education on energy efficiency, and they wanted it in less than one day, for under $200, Lighner said. They also preferred the term Energy Smart to Green and other terms.

Accordingly, her Energy Smart course now lasts from 5 to 6 hours in a single session and costs about $100.

Lightners programs have also taken her throughout the country.

I just came back from teaching in Maine and New Hampshire for the third time in four months, she said. I will also be teaching in Georgia, Rhode Island, Texas and Florida.

A member of the NVAR Multi-Million Dollar Club, she still practices as a realtor although, she said, Nowadays I seem to be spending most of my time in the classes.

Of all the questions that her students now ask her, one is by far the most frequent.

They want to know how dangerous fluorescent bulbs are, she said, with a smile.
These students are obviously aware that fluorescent bulbs contain mercury. They have become a timely topic, thanks to the Energy Independence and Security Act of 2007, requiring all bulbs to be 70 percent more efficient by 2020. A compact fluorescent bulb can burn for 10,000 hours, compared to 2,500 for the traditional incandescent style.

I tell them that fluorescent bulbs are not very dangerous at all, she reported. After giving instructions on safe disposal, she said, I am happy to see that they are reassured.

Such seemingly minor changes can add up to major energy savings, explained Jane Quill of RE/MAX Presidential and the NVAR past chairman.

If you change every light bulb to fluorescent or light-emitting diode, you will be saving a tremendous amount, she said. When we replace things in our homes, like windows and appliances, we should try to do it with more energy efficient versions.

Quill said that the course encouraged realtors to spread the word among their clients. adding, We can have a major influence by convincing everyone to do a little bit that will make a huge difference.

Lightner began the ESRES program last year, after working with the Department of Energy. She developed the Real Estate Initiative there, fostering close cooperation between the DOE and the National Association of Realtors. Here, too, the goal was to help realtors educate their clients on energy efficiency.
Her goal now, she says, is to help the realtors who are working hard to help their clients save money and live in a more comfortable, healthier environment.