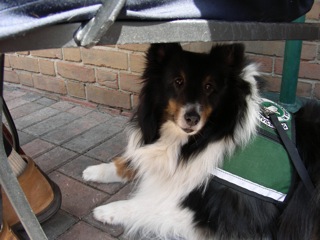 Ah! Spring is sprung, the grass is green and Im at Pat Troys being treated like a queen.

It was a gorgeous day last week; sunny and bright with a light breeze. My brother, Mikey MacDougal, and I were on the patio at Pat Troys Irelands Own Restaurant and Pub having lunch. What a treat. As a service dog, I am welcome to eat anywhere in town, but Mikey is not a service dog. For the most part, the Health Department does not allow him to be in places where food is served. But Mikey is a welcome guest for Pat Troy. Our pet guests are served the same food that we eat: grilled chicken, Angus beef and our signature lamb or beef stew, Troy said.

Our waiter, Joe, brought us a chilled bowl of water with ice. My person selected the grilled chicken for Mikey and me and she ordered fish and chips for herself. The food was wonderful but what was really grand was to be able to eat together on the patio at Pat Troys.

Pets who accompany their people who are dining are not allowed inside a restaurant. If there is outdoor seating, they almost always have to sit outside of a railing. If on travel, they have to eat in their hotel room.

At a City Council meeting on April 17 back in 2004, the issue of a variance for Pat Troys Irelands Own Restaurant was a docket item. I found this summary of that hearing on the city website. The Action Docket is a summary of meeting deliberations prepared largely for staff follow-up.

Mayor Euille asked Bob Custard with the Health Department to speak about the Health Departments action and enforcement of the ordiance against dogs in restaurants. He said he believed Council would request the city manager to bring this forward and back to Council for reconsideration if it has to bring it in line with Councils commitment for ensuring that restaurant businesses are open to everyone, including dog lovers and their dogs.

Mr. Custard, Director of Environmental Health for the Health Department, made a detailed presentation of the Health Departments enforcement of the citys ordinance, which had been in place since 1940. He noted the public health issues involved in serving dogs at restaurants.

City Attorney Ignacio Pessoa said he had been looking at some of the issues and said he would do a memo outlining the degree to which the city has discretion in this area, and he pointed out that the city has budgetary authority over the Health Department. He said that the cases come to his office for enforcement if they need to go to court. From that point, the city has authority as to exactly what discretion they want to exercise and what cases they want to move forward with.

Pat Troy said that for 24 years he has been serving food to dogs at his restaurant, and last year (2003) he implemented a menu. He explained the process that had happened with his restaurant serving meals to dogs and the problem with the Health Department. He said he received a letter on April 5 from the Health Department saying what could and could not be done. He said it needs to be looked into. He noted the gathering at 11 a.m. today (April 17, 2004) to get petitions and let Council know that they are serious about the situation.

Well, here we are five years later and Pat Troy is still serving us on the patio. He got his variance in 2004. Dogs that come here are with their families and dont mess around. They are better behaved than most human beings, Troy said.
Now you know why I consider April 17 Pat Troy Day.

Gentle readers keep your tail high and your feet dry. See you at Pats. Daisy Mae