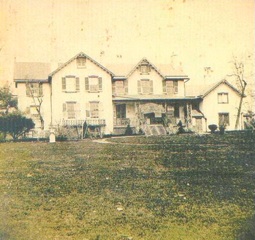 With war raging around him and the weight of a nation on his shoulders, President Abraham Lincoln found his sanctuary in a cottage overlooking the city that he loved: the Summer Cottage on the grounds of the Soldiers Home in Washington, D.C.

The equivalent of todays Camp David, the Summer Cottage is where Lincoln and his family spent one quarter of his presidency, beginning shortly after his young son, Willie, died in 1862. The $15 million, newly restored National Trust for Historic Preservation site gives visitors a new perspective on one of the nations greatest presidents and is well worth the short drive from Alexandria to northeast Washington, D.C.

Although several other presidents spent time at the Summer Cottage, the focus is all on Lincoln, who spent the most time there and visited the day before he was assassinated. Even presidential history buffs are likely to learn new facts and aspects of Lincolns life during a visit to the cottage, which was officially opened to the public for the first time on February 19, 2008.

The 34-room stucco cottage sits on a hill overlooking Washington. When Lincoln and his family spent late spring and summer there, they were able to escape the citys congestion and heat, where temperatures were as much as 10 degrees warmer than at the cottage. The location also afforded Lincoln an easy 45-minute, three-mile commute via horseback to the White House everyday.

When the family first moved up to the Summer Cottage in 1862, Mary Todd Lincoln was grief-stricken by the death of her son, Willie, who died possibly from polluted drinking water. Eight-year old Tad was also devastated by the loss of his older brother and his mother thought the cottage would be a good place for them to grieve.

The Soldiers Home itself was a place for disabled and retired soldiers from the War of 1812. The Mexican War and Civil War cemetery on the grounds was just a couple of hundred yards from the cottage.

Built by banker George Washington Riggs in 1842, the Gothic Revival style home on 256 acres was expanded several times before Riggs sold it to the federal government in 1851. The federal government continued to enlarge the Summer Cottage, building veterans dorms and officers quarters on the property.

Prior to Lincoln, President James Buchanan lived at the Soldiers Home in 1857. After Lincolns presidency, President Rutherford B. Hayes spent the summers of 1877-80 at the Summer Cottage. And in the winter of 1882, President Chester A. Arthur lived there while the White House was having some construction work done. Then, for nearly 100 years, the Summer Cottage went unused by presidents and was nearly forgotten by historians until being rediscovered in the 1990s.

Lincoln spent approximately five months a year at the Summer Cottage, taking with him between 10 and 19 wagon loads of furniture, clothes and books each year. The furniture in the cottage today is from the 1860s but was not actually used by Lincoln. One of the most memorable pieces in the house is a large walnut desk, which is a replica of Lincolns private desk where he drafted policies, speeches and the Emancipation Proclamation. The original Lincoln desk is in the Lincoln bedroom at the White House.

Upstairs in the Summer Cottage, the rooms are all deliberately painted white to project quotes of Lincoln and historical images on the walls. After having toured the visitors center and Summer Cottage, one cannot help but leave with a deeper understanding of Lincoln as president, husband, father and friend with a never-ending quest for knowledge and understanding.

While touring the Summer Cottage, visitors learn about how Lincoln loved reading the Bible, William Shakespeare and Robert Burns, how he genuinely liked visitors, and how he appreciated his ride to the White House each day. Lincoln often rode alone to the White House and savored that time to think and greet people along the way. His journey took him past freed slaves in contraband camps. He used to wave and exchange nods almost every morning when he saw poet Walt Whitman, who noted that Lincolns face became more drawn and tense as the war dragged on.

His family and the Secretary of War, Edwin M. Stanton, feared for Lincolns life and tried whenever possible to send six cavalry riders with himdespite protests from Lincoln that he was safe. In fact, Lincoln would often rise before dawn to set out for the White House before his cavalry escorts arrived.

One night in August of 1864, the fears for Lincolns life were nearly realized; as he drew close to the gates of the Soldiers Home, shots rang out. His hat fell off as he rode up the hill and through the gates to the cottage. When soldiers went back to check out the situation and retrieve his hat, they found a bullet hole through the top. It has been said that John Wilkes Booth planned to kidnap Lincoln in 1864 as he rode to or from the White House, but decided to assassinate him instead.
While at the cottage, Lincoln and his wife sometimes visited the Union fortifications surrounding Washington. Lincoln visited Fort Stevens, a short distance north of the Summer Cottage, on July 11-12 in 1864 when Confederate General Jubal Early attacked. One story is that Union Major General Horatio Wrights aide-de-camp,Oliver Wendell Homes Jr., (who later became a Supreme Court Justice) yelled to Lincoln as he watched the battle, Get down you fool! An eyewitness at Fort Stevens reported that the president was almost hit by Confederate fire.

The Fort Stevens incident was the second time a sitting U.S. president came under enemy fire. (The first time was when James Madison rode out to watch the British attack at Bladensburg, Maryland, during the War of 1812.) Due to the close proximity of the Summer Cottage to Fort Stevens, the Lincolns were evacuated from the Summer Cottage and taken to the White House in the middle of the night.

There are poignant stories of how moved the Lincolns were by the fresh graves being dug for Union soldiers near their home nearly every day. Sometimes as many as 40 new graves were dug in a day and by the end of the war, 5,000 Union troops were buried there. When this cemetery reached its capacity, the national cemetery at Arlington was established on the grounds of the Custis-Lee Mansion.

Tours of the Summer Cottage begin at the Robert H. Smith Visitor Education Center, which is located in a restored 1905 building across the road from the cottage. Tours are limited to 15 people. Photos and rotating exhibits of artifacts from Lincolns presidency are also on display.

We want visitors to the Summer Cottage to have a deeper understanding of Lincoln as a person and Lincolns legacy as a great leader and president, the director of the Lincoln Summer Cottage, Dr. Frank Milligan, said. Lincoln wanted all people regardless of race, religion, creed, ethnicity and gender to have the same economic opportunities. Those are still ideals we are striving for in this country.
For more information:
Reservations are recommended for the Lincoln Summer Cottage. President Lincolns Cottage is located on the grounds of the Soldiers Home, the active Armed Forces Retirement Home, at Rock Creek Church Road and Upshur St. NW in Washington, D.C. All tours are guided and limited space is available.