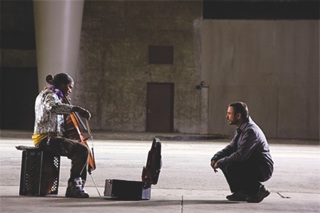 The Soloist has all the elements of an uplifting drama, except for the uplift. The story is compelling, the actors are in place, but I was never sure what the filmmakers wanted me to feel about it. Based on a true story, it stars Jamie Foxx as Nathaniel Ayers, a homeless man who was once a musical prodigy, and Robert Downey Jr. as Steve Lopez, the Los Angeles Times columnist who writes a column about him, bonds with him, makes him famous, becomes discouraged by the mans mental illness and what? Hears him play great music?

Explaining madness is the most limiting and generally least convincing thing a movie can do, Pauline Kael once wrote. The Soloist doesnt even seem sure how to depict it. Unlike Russell Crowes mathematician in A Beautiful Mind, whose madness was understood through his own eyes, the musician here seems more of a loose cannon, unpredictable in random ways. Yes, mental illness can be like that, but can successful drama? There comes a point when Lopez has had enough, and so, in sympathy, have we.

That is no fault of Jamie Foxxs performance creating a man who is tense, fearful, paranoid and probably schizophrenic. We can almost smell his terror, through the carnival clown clothing and hats he hides behind. When Foxx learned of this role, he might reasonably have sensed another Academy Award. Unfortunately, the sceenwriter and director dont set up a structure for Oscar-style elevation, nor do they really want to make a serious and doleful film about mental illness. But those are the two apparent possibilities here, and The Soloist seems lost between them.

As the film opens, Lopez is troubled. His marriage has problems, he feels burned out at work, hes had a bike accident. He encounters Ayers almost outside the Times building, attracted by the beautiful sounds hes producing on a violin with only two strings. The man can play. Lopez tries to get to know him, writes a first column about him, learns he once studied cello at Juilliard. A reader sends Lopez a cello for him (this actually happened), and the columnist becomes his brothers keeper.

This is a thankless and possibly futile task. The Soloist does a very effective job of showing us a rehab center on Skid Row, and the reason so many homeless avoid such shelters. Its not what happens inside, but the gauntlet of street people necessary to run just to get to its doors. Indifference about adequate care for our homeless population was one of the priorities of the Selfish Generation.

As a mentally ill man, Ayers is unpredictable and explosive, yes, but almost as if responding to the arc of the screenplay. Characters have arcs in most movies, but the trick is to convince us were watching them really behave. Here Foxx is let down, and the disappointment is greater because of the track records of director Joe Wright (Atonement) and writer Susannah Grant (Erin Brockovich). We see a connection between the two men, but not communication.

As a newspaper columnist, Downey is plausible as his overworked, disillusioned character, finding redemption through a story. And Catherine Keener, like Helen Mirren in State of Play, convinces me she might really be an editor. Both actresses bring a welcome change of pace from the standard Lou Grant type. Talk about disillusionment; the old-timers cant believe their eyes these days. The Los Angeles Times of this movie is at least still prospering.

As for the music, Beethoven of course is always uplifting, but the movie doesnt employ him as an emotional show-stopper, as Debussys Clair de Lune is used in Tokyo Sonata. Theres no clear idea of what it would mean should Ayers triumph in a public debut; would it be a life-changing moment or only an anomaly on his tragic road through life? Can he be salvaged? Does he want to be? Or will he always be a soloist, playing to his demons in the darkness under a bridge?

Earth – (Documentary, G, 99 minutes). A beautiful documentary of Earths climates and wild creatures, featuring spectacular photography. Distilled from the BBC/Discovery series Planet Earth, and taking advantage of the big screen to make full use of its hi-def visuals. Younger audiences in particular will enjoy it. Narrated by James Earl Jones. Rating: Three stars.

Sita Sings the Blues – (Animation, not rated, 82 minutes). An animated version of the epic Indian tale of Ramayana, set to the 1920s jazz vocals of Annette Hanshaw, with a parallel plot about a modern San Francisco woman betrayed by her husband and hilarious narration by three modern Indians. Enchanting and astonishingly original. Directed, written, animated by Nina Paley. One of the years best films. Rating: Four stars.

The Informers – (Drama, R, 98 minutes). About dread, despair and doom, and the eerie ways that music and movies connect people from vastly different lives in a subterranean way where drugs, fame and sex are the common currency. A screenplay by Bret Easton Ellis occupies a bleak world of empty Hollywood types and would-bes, empty souls in hollow lives. Like a soap opera from hell. With Billy Bob Thornton, Mickey Rourke, Kim Basinger, Winona Ryder, Chris Isaak, Amber Heard, Brad Renfro. Rating: Two and a half stars.

Fighting – (Action drama, PG-13, 105 minutes). Whats advertised as a genre picture about New York professional street fighters turns out to be a lot more: The characters and actors bring uncommon interest to the story. Terrence Howard plays a mild-mannered boxing promoter who sidesteps all the cliches of such roles; Channing Tatum is a small-town Alabama kid in the big city; Zulay Henao is a sweetheart as a waitress in a rough club; and Altagracia Guzman steals her scene as the waitresss protective older relative. Rating: Three stars.

Anvil! The Story of Anvil – (Documentary, not rated, 90 minutes). Two Toronto kids make a pledge to perform rock n roll until theyre old, and theyre still keeping it after their once-influential heavy metal band is all but forgotten. A documentary about the most recent of their comeback hopes, centering on guitarist Steve Lips Kudlow and drummer Robb Reiner, who have a love-hate relationship but cling doggedly to their dream. Surprisingly touching. Rating: Three stars.
Roger Ebert