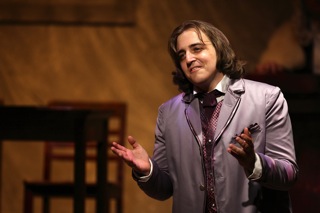 He was known around the world for his wit and wisdom. Yet for Oscar Wilde, it was his downfall in what was then the trial of the century that reduced him to a broken-down, penniless outcast, all in the name of the love that dare not speak its name.

The phrase is from the poem Two Loves by Lord Alfred Douglas, whose relationship with Wilde led to the charges of committing acts of gross indecency with other male persons to be brought against the celebrated playwright. It is these trials that come to life in Gross Indecency, The Three Trials of Oscar Wilde, now playing at the Little Theatre of Alexandria.

The phrase gained notoriety as a euphemism for homosexuality in the trials of Wilde that took place in London in 1895 and rocked Victorian society.

Written by Moises Kaufman, the dialogue in Gross Indecency is taken directly from court transcripts, newspapers, personal letters and biographies and details what began as a libel suit brought against Douglass father by Wilde himself. The second and third trials were on the charges against Wilde, with the second ending in a hung jury and the third resulting in a conviction that imposed the maximum sentence of two years in prison with hard labor.

The trials, a cause celebre as salacious details emerged about Wildes personal life, were plagued by near hysteria from the press and those vying to be in the galleries.

Mesmerizing in the demanding role of Wilde is Christopher Guy Thorn, who is impeccable in his delivery of Wildes trademark satirical wit. Continuously on stage throughout the play, Thorn is riveting in his role and vividly portrays the fall of the celebrated, perhaps even arrogant, man that is humbled and humiliated.

Making his LTA debut is Adam P. Downs as Douglas. The talented Downs is perfectly suited to the role of the handsome young man who proved so beguiling to Wilde.

Ian Fore is the Marquess of Queensbury, the father of Douglas and steadfast defendant against Wildes charges of libel in the trial that first exposed the illicit romantic relationships between Wilde and his younger male companions.

LTA veteran Lars Klores is a commanding presence as a solicitor and judge in the various trials, as is Robert Worst as the original trial judge.

Marcus J. Fisk, returning to LTA after his turn as Roger Sherman in 1776, portrays several roles, including that of Wildes contemporary George Bernard Shaw. Fisk gives a memorable performance, relying heavily on his skillful precision and impeccable timing.

Shawn g. Byers, returning to LTA after his recent and hilarious debut in Greater Tuna, once again transitions between numerous roles, including that of Queen Victoria. Author of the gross indecency law, which curiously only applied to men at the time, Byers delivers one of the funniest lines of the night as the queen explained that Women dont do such things.

Rounding out the stellar 11-man cast are Rich Amada, himself an award-winning playwright, Ric Anderson, Brian Dean and Jeff McDermott. All give strong performances as they continuously read from a variety of sources, resulting in an ever-shifting courtroom drama laced with verbal sparring and Wildes trademark wordplay.

But it is director Frank D. Shutts II who truly leaves the audience in awe as he brilliantly brings the challenging script and diverse talents of the ensemble cast together. With precision staging and direction, Shutts gives the audience a gripping depiction of both the literal and figurative trials that plagued the tragic Wilde.

Set design by the award-winning Ken Crowley and period costumes by Jean Schlichting and Kit Sibly provide the perfect, understated compliment to the spellbinding script.

No sooner had the last lights dimmed than the audience was on its feet with a well-earned and extended standing ovation for the brilliant performance of the LTA cast and crew.

Gross Indecency is far more than just a historical look at the trials of Oscar Wilde. It is a memorable, thought-provoking and riveting experience of theatre at its finest.

Gross Indecency is playing now through May 9 at the Little Theatre of Alexandria, 600 Wolfe Street. For tickets or more information, call 703-683-0496 or visit www.thelittletheatre.com.