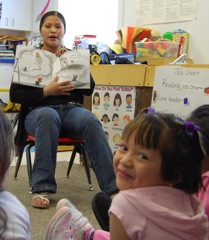 When you are a kid and go to school for the first time there are some assumptions; that you can write your name, sit still, behave, count to 10 and know the alphabet. There are consequences if you cannot.

Back in 1984, for 17 children living in the Cameron Valley Housing Project, their inability to do those things meant that they failed kindergarten. Their parents were informed that because their sons and daughters lacked fundamental social and cognitive skills they would not be allowed to attend first grade. Rather than sit idly by, a group of concerned mothers persuaded a church to help them start a preschool. They placed an ad in the paper that began simply, Change the life of a child. Barbara Fox Mason, a kindergarten teacher who had moved to Alexandria with her husband from Massachusetts, was hired, and with six students, the Alexandria Community Network Preschool made its debut.

Today, the Child and Family Network Centers oversees six centers and is still led by Mason. Serving 156 families, CFNC now includes a nationally accredited preschool program for nearly 200 3- and 4- year-olds in Alexandrias and Arlingtons poorest neighborhoods. These are children who are not eligible for Head Start and who cannot afford other preschool options. The preschool and additional family support services, including ESL classes and health services, are provided free of charge to families living at or below 185 percent of the poverty level, which is $39,220 in annual income for a family of four.

I am on the board of the CFNC because I have witnessed first hand with my 5- and 6-year-old what preparation for kindergarten can produce, said Elizabeth Luchesi, an Alexandria resident, local realtor and CFNC board member. When my husband and I were going through the process of enrolling our children in kindergarten, we saw what our childrens preschool education had done for them.
The first years of life are crucial to the development and functioning of the brain. Early experiences affect learning, and a childs knowledge and skills when they start school helps determine later success in the classroom and workplace. Failing kindergarten is not a good way to start off life. For low-income preschoolers, increasing early literacy and mathematics skills are vital. Poverty is the number one indicator of academic failure. Alexandria Public Schools reports that more than 200 children, the vast majority of whom come from low-income families, enter kindergarten each year without a preschool experience. They do not perform as well as their classmates who did have preschool experience.

According to Luchesi, The children without the fabulous foundation of preschool have not only missed out on the A,B,Cs, but also the socialization skills that are paramount in a childs platform for building success. CFNC is even more than a preschool. It is a safe place for families to come and learn computer skills, English, cultural education and so much more.

To build an effective early learning system, parents and families need to be involved and to take the lead in raising their children, and organizations like CFNC give parents the tools and support to do that. At our Birchmere center, we are known by the families we serve, not as the Child and Family Network Centers, but as la escuelita or the little school, said Ryan Smith, CFNC manager of grants and major gifts. The centers are based in neighborhoods where the families live in an effort to reduce obstacles such as transportation and work schedules. Beginning around 8:45 a.m. each day, children are dropped off at la escuelita where they stay until 3 p.m. Two teachers, one who is bi-lingual, manage a classroom of 18 students. There are after school programs that go until 5 p.m.

One of the great gifts of the CFNC is the way they empower parents to become teachers through a Teacher Assistant Program, which gives parents the opportunity to learn, observe and improve their parenting skills. After attending a number of workshops they are able to work side by side with teachers in the classroom while earning a small stipend. In FY2008-09, over half of CFNCs lead teachers are parents of former CFNC students. They began as Teacher Assistant Program trainees and have earned their Child Development Associates credential. Many are working toward their Associates or Bachelors degree.

For me, just to know that I am touching childrens lives – that they are excited about what they can do, and just to see them write their names for the first time and watch as their faces light up lets me know that I am doing something worthy, said Arnita Willis, a preschool teacher at the Birchmere Center. I have been working at CFNC for five years. I love my job. I tell my kids, Next year you are going to kindergarten and your teachers are going to be amazed!

The programming cost per student per year is $9,000 and the CFNC relies on foundations, grants,
corporations, the City of Alexandria, Arlington County and individuals to sustain them. Without programs like those offered by the CFNC, chances are that their students would be as much as 18 months below the development norm for their age, and be 60 percent below the average cognitive scores of children in higher socioeconomic groups. Getting the chance to catch up would be nearly impossible.

We provide these services because we recognize that preschool is not a luxury, Smith said. Due to the current economic climate and a decrease in corporate and foundation giving, we have 128 children on our wait list. In FY2009/10, CFNC will be opening two new classrooms; one in Alexandria in partnership with the Alexandria Department of Recreation and one in Arlington with the Arlington Housing Corporation.

CFNC gives to Arlington and Alexandria by providing wonderful services to families who cannot afford them. It works, Luchesi said. On April 24, CFNC will celebrate 25 years of service by holding a benefit at the home of Steven and Catie Peterson. We are proud to support CNFCs early intervention and family services which have helped thousands of children enter elementary schools with the skills they need, Catie Peterson said.

For more information on CFNC or to be a part of their 25th anniversary celebration, visit their website at www.cfnc-online.org.