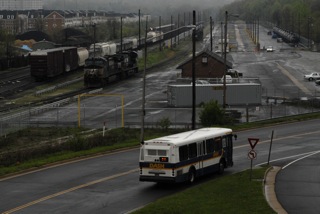 The City of Alexandria cannot alter the routes taken by trucks hauling highly flammable ethanol for the Norfolk Southern Corporation, nor can the city control the companys hours of operation, a federal court ruled Tuesday.

More than a year has passed since Norfolk Southern began operating their transloading facility, where highly flammable ethanol is transferred from railcars to tanker trucks then transported through the city to the beltway.

The recent trial signified the culmination of citizen outcry against the station, the citys opposition to it and Norfolk Southerns apparent right to operate the facility under federal preemption.

Because of a gaffe on the citys part in which information about the operation was not internally communicated in time, the expansive hauling corporation settled within 1,000 feet of Cameron Station and Summers Groves residential developments, Samuel Tucker Elementary School and Van Dorn Metro Station last April without city officials consent or safety officers ability to repress an ethanol-related incident.

Alexandrias public safety departments eventually received equipment and training to battle a spill or ethanol fire, but the issues concerning Alexandrians now include quality of life. Noise pollution and traffic have combined with the safety issue, making the facility a triple threat in the eyes of area residents.

Even last night at 11 or 11:30 I heard the trucks outside, said Ingrid Sanden, president of the Cameron Station Civic Association, an organization that was instrumental in bringing the issue to the attention of officials last year. Business is being done and [the company] doesnt care.
The actual transfer of ethanol occurs mostly from 7 a.m. to 6 p.m., but the company has the capability to operate seven days a week, 365 days a year, according to court documents. Each rail car, of which the facility can hold 20, can hold about 29,000 gallons of ethanol or three and-a-half trucks.

The city hoped the court would rule in its favor by making mandatory a permit cutting the trucks hours of operation to non-peak times of the day and restricting the routes of the private trucking company contracted by Norfolk Southern to carry out the transloading operation. The citys ideal permit would have re-routed the trucks away from a merge lane deemed less safe than another route, and away from Summers Grove to mitigate the impact on residents quality of life.

Our argument to the court was that we were regulating trucks that are neither owned nor operated by the rail carrier on city streets, City Attorney Chris Spera said. We were not trying to impact anything that happened on the rail line.

But Judge James C. Cacheris ruled that such a permit would be part of an underlying attempt to shutdown the facility, based on public comment from elected city officials indicating their desire to oust it from the city.

The permits thus appear to be aimed at the railroad and its operations, not the operations of the private trucking companies, Cacheris stated in his opinion.

Norfolk Southerns spokesman Robin Chapman said, We are pleased that the decision supports our position.

The blow to the city came on the heels of an opinion from the National Safety Transportation Board, a federal entity, stating Alexandria did not have the authority to alter the railroads operation because it is protected by federal law.

Spera said the city will appeal the decision. In the meantime, the city will try to enforce the haul route another way, which could only take three to six months. According to the Hazardous Materials Transportation Act, he said, the citys route could be enforced because it impacts local circumstances. The trucks voluntarily follow the citys desired path for the most part from what city agents have observed, but In our view, the litigation was [about] the enforcement, Spera said.
Sanden said that while she understands the safety concerns of hauling ethanol through the city, Right now its a quality of life issue, adding that she was disappointed the reduced hours of operation will not be enforced.

I thought the city had some good arguments, Sanden said. It was a long shot, but we were hopeful.

The city has 30 days to appeal the decision but Spera was not optimistic about a quick return, saying another decision could take up to a year. The waiting thus far has taken a toll on some of the affected areas residents who, at this time last year, were palpably present at City Hall and actively outspoken about city accountability for the Norfolk Southern facility.

Some people have resigned themselves but it doesnt mean theyre not mad, Sanden said. Theyre mad at the city, theyre mad at Norfolk Southern and they feel like weve hit a brick wall.

But some are as mad as they were a year ago.