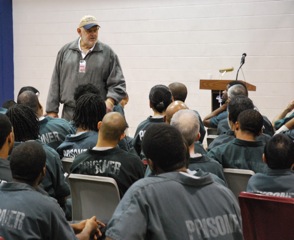 Connecting on a jump shot is one thing, but connecting with a gymnasium full of inmates is a whole different game.

Watching Skeeter Swift interact with inmates of the Alexandria Detention Center last week, chances are you might be thinking otherwise.

An Alexandria legend renowned for his skill on the court while at the former George Washington High School, East Tennessee State University and as a professional basketball player, Swift, 62, easily captivated a different sort of crowd in the jails gym speaking openly about his younger years as a player and a troublemaker and the lessons hes learned since then.

It was the first time that inmates at the jail had heard from a person with a colorful background, a successful athlete who succumbed to some youthful indiscretions and was plagued by a case of bipolar disorder until he was 46.

It was not, however, Swifts first time speaking to that sort of captive audience and knew going in that the key was to speak plainly and honestly with the crowd.

When you get in front of people like that, youve got to have a tell-all conversation, because if you dont they can detect that youre lying or deceiving or not telling the truth, Swift said.
They felt me being honest with them, he said.

Alexandria Sheriffs Department spokesman Harry Covert, a longtime friend of Swifts who helped bring him back to Alexandria for the engagement, said it was the first time the inmates got that sort of motivational experience from someone with an athletic background.

Skeeter really connected with them, they really paid attention, Covert said. He was funny with them, but they still got the message.

Covert said that the 103 inmates who attended all volunteered and wanted to take part, something that showed in how they reacted to Swift.

They didnt expect a fun thing. I think they expected someone who was going to talk down to them, but he talked with them and that was important, Covert said.

Swift, who now lives in Kingsport, Tenn., with his wife and dogs a Chihuahua, Schnauzer and a Chow has one of the most sterling basketball reputations to ever come out of Alexandria.

What began on the court at the Lee Street playground soon extended to courts throughout the Washington, D.C. area, a hall-of-fame career at ETSU and six years of professional basketball in the ABA and NBA.

And yet, all was not rosy for Old Towns pro.

Growing up with a mother and stepfather who were alcoholics, Swift was unaware that he was dealing with the throws of bipolar disorder and left to take care of himself most of the time.

I was always into mischief, Swift said. Norman Grimm, who was a detective with the police department for a number of years, used to help keep me out of trouble. Most of my mentors were coaches or people like that, but I basically stayed on the street.

With a story that is at once sparkling and spotty, its easy to see the number of ways that he can connect with an audience like the one that turned out at the jail, and Swift wanted to make sure those in attendance got it all.

I wanted to make sure they knew I was human and that I made mistakes, he said.

In getting across his message, Swift urged the inmates to find someone to unload on, someone to confide in so that they can have a healthier mind and begin to move forward in a positive direction.
I tried to share with them that theyve got a mind that theyve got to utilize and nurture, Swift said. Instead of having hatred in their hearts, theyve got to learn to love themselves.