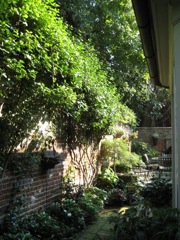 Eight historic buildings and gardens will be open to the public during the Old Town Home and Garden tour on Saturday, April 18, from 10 a.m. to 4 p.m. The Garden Club of Alexandria and the Hunting Creek Garden Club host the annual event during Virginia Historic Garden Week. (Call the Alexandria Visitors Center at 703-838-4200 for more information). Homes showcased in this years tour are:

207 NORTH FAIRFAX STREET
Built circa 1749 by John Dalton on the first lot auctioned in Alexandria, the house, complete with wharf, was situated on the rivers original bank (now Lee Street). In 1853, Daltons great-granddaughter, Ann Pamela Cunningham, formed the Mount Vernon Ladies Association, and as its first regent directed the campaign to fund the purchase of Mount Vernon in 1859, thus beginning the American historic restoration movement. The spacious terrace and lawn areas include rooms and anterooms for two gardeners.

Double doors lead to the small side garden from both the dining room and kitchen. It features two fountains, a small outdoor kitchen and a variety of plantings including ferns, a trellised magnolia, boxwood and clematis.

426 SOUTH LEE STREET
This frame house was constructed prior to 1879, when its owner, George Peverill, with others, built the Free Methodist Church, which used this home as the parsonage.

A 1988 addition features a sunroom that replaced the original back porch and a guest room, both overlooking a walled garden. A flight of steps leads to the garden and a slate-floored garden room that doubles as a hothouse for potted plants in the winter.

510 SOUTH FAIRFAX STREET
Built in 1804, this Federal townhouse has been the home of the current owners for more than 25 years. The hall and library are the original house, built when Thomas Jefferson was president. The 18th century architects desk was originally a traveling box used when architects often journeyed to job sites. Toile draperies are made of vintage fabric from the Georgetown house of David and Evangeline Bruce.

The garden includes raised areas reminiscent of New England gardens with a privet hedge, daylilies and hydrangeas in summer. The exit leads to the front patio and parking area paved with cobblestones harvested from Fairfax Street when it was repaved.

513 SOUTH FAIRFAX STREET
This fine, early 19th century brick Federal-style residence was completely redesigned and renovated by noted architect Robert Bentley Adams, who lives across the street. The living room and adjoining dining room were opened with classical pilasters supporting a new lintel.
The rear garden is designed with serpentine planters fitted around the preserved trees that were carefully protected during construction.

307 SOUTH ST. ASAPH STREET
The two houses at 307 and 305 South St. Asaph Street were probably constructed by 1790 because their lots were purchased around 1785. After Benjamin Shreve built 307, Richard S. Huck purchased the house in 1854. Federal military authorities seized the building in 1862 to house federal soldiers and escaped slaves.

In 1998, the front of the home was restored to the Neo-Classical style, after extensive research from the Valentine Museum (Valentine Richmond History Center) in Richmond.

201 PRINCE STREET, THE ATHENAEUM
Situated at the top of the cobblestone street known as Captains Row, the Athenaeum is a glorious example of Greek Revival architecture in the Neo-classical style, with a charming walled garden in the rear.

In 1964, the newly-founded Northern Virginia Fine Arts Association purchased and repaired the structure.

228 SOUTH PITT STREET, ST. PAULS EPISCOPAL CHURCH SANCTUARY
This year marks the 200th anniversary of the founding of St. Pauls Episcopal Church, following a division in the congregation of Christ Church. The building, designed by Benjamin Henry Latrobe, chief architect of the U.S. Capitol, was erected in 1817-18. In 1872, stained-glass memorials replaced the original clear glass windows in the east wall, including the luminous round Catharine wheel window. The gallery windows were changed to stained-glass somewhat later, followed by the memorial windows on the main floor.

CARLYLE HOUSE HISTORIC PARK
121 North Fairfax Street. When Scottish merchant John Carlyle completed his riverfront house in 1753, this was the grandest mansion in the new town of Alexandria. The homes stone architecture and its furniture and decorative finishes reflect Carlyles status and wealth. The Garden Club of Virginia restored the front landscape to the mid-18th century period. A lovely garden with boxwood parterre graces the rear of the house. Guided tours are offered 10 a.m.-4:30 p.m. Tuesday-Saturday. 1- 4:30 p.m. Sunday.

GEORGE WASHINGTONS MOUNT VERNON ESTATE AND GARDENS
Situated on the Potomac River eight miles south of Old Town, Mount Vernon was the home of George and Martha Washington. From the end of the American Revolution in 1783 to his election to the presidency in 1789, Washington replaced out-buildings, reshaped gardens, created new lawns, planted trees and even realigned roads and lanes. With funding from Historic Garden Week, The Garden Club of Virginia has helped to restore Mount Vernons bowling green, one of the major landscape features on this vast plantation. Guided tours available at 11 a.m., 1 p.m. and 3 p.m. daily.

RIVER FARM
7931 East Boulevard Drive, Alexandria. River Farm, headquarters of The American Horticultural Society, is an historic 25-acre property on the banks of the Potomac River. Features include an early 20th century gentlemans home and beautiful gardens that showcase the practices and principles of AHS. The property boasts several varieties of gardens and what is considered to be the most spectacular view of the Potomac River that Virginia has to offer. Hours: 9 a.m.-3 p.m.

WOODLAWN
9000 Richmond Highway, 3 miles west of Mount Vernon at the intersection of Rte 235 and U.S. Rte 1. This Federal mansion was built on 2,000 acres that George Washington carved from Mount Vernon when his wifes granddaughter, Nelly Custis, married his nephew, Lawrence Lewis. Designed by Dr William Thornton, the first architect of the United States Capitol, this lovely house contains fine Federal period furnishings, many brought from Mount Vernon. The Garden Club of Virginia restored the garden in 1958-60. Open 10 a.m.-4 p.m.

GUNSTON HALL PLANTATION
Fifteen miles south of Alexandria off U.S. Rte 1 on Rte 242. This 550-acre National Historic Landmark was the home of George Mason (1725-92), author of The Virginia Declaration of Rights. The estate consists of a Georgian mansion, circa 1755, and reconstructed kitchen, dairy, laundry and schoolhouse. The brick mansion exhibits elaborately carved woodwork enhanced by furnishings of the colonial period. The Potomac River is viewed through the original Deer Park. The Garden Club of Virginia restored the gardens in 1949-53 and has assisted in research to provide additional insight into George Masons 18th century garden. Open 9:30 a.m.-5 p.m.

How to Get Tickets
Tickets are $40 for the entire event tour day and inc
ludes admission to six private houses and gardens, refreshments at St Pauls Church and admission to nearby historic properties. Group tours for 10 people or more, and tickets purchased in advance are $35. Single-house tickets with garden admission are $10. Full-day tickets for children under 12 are $20, single-house or garden admission $5. Children younger than 17 must be accompanied by an adult. Infants are admitted free. Tickets may be purchased on tour day at any of the tour houses and at the Alexandria Visitors Center, 221 King St (703-838-4200). Advance tickets are $35 at the Alexandria Visitors Center, the Athenaeum, the Market Square Shop, The Enchanted Florist, or online at www.VAGardenweek.org.