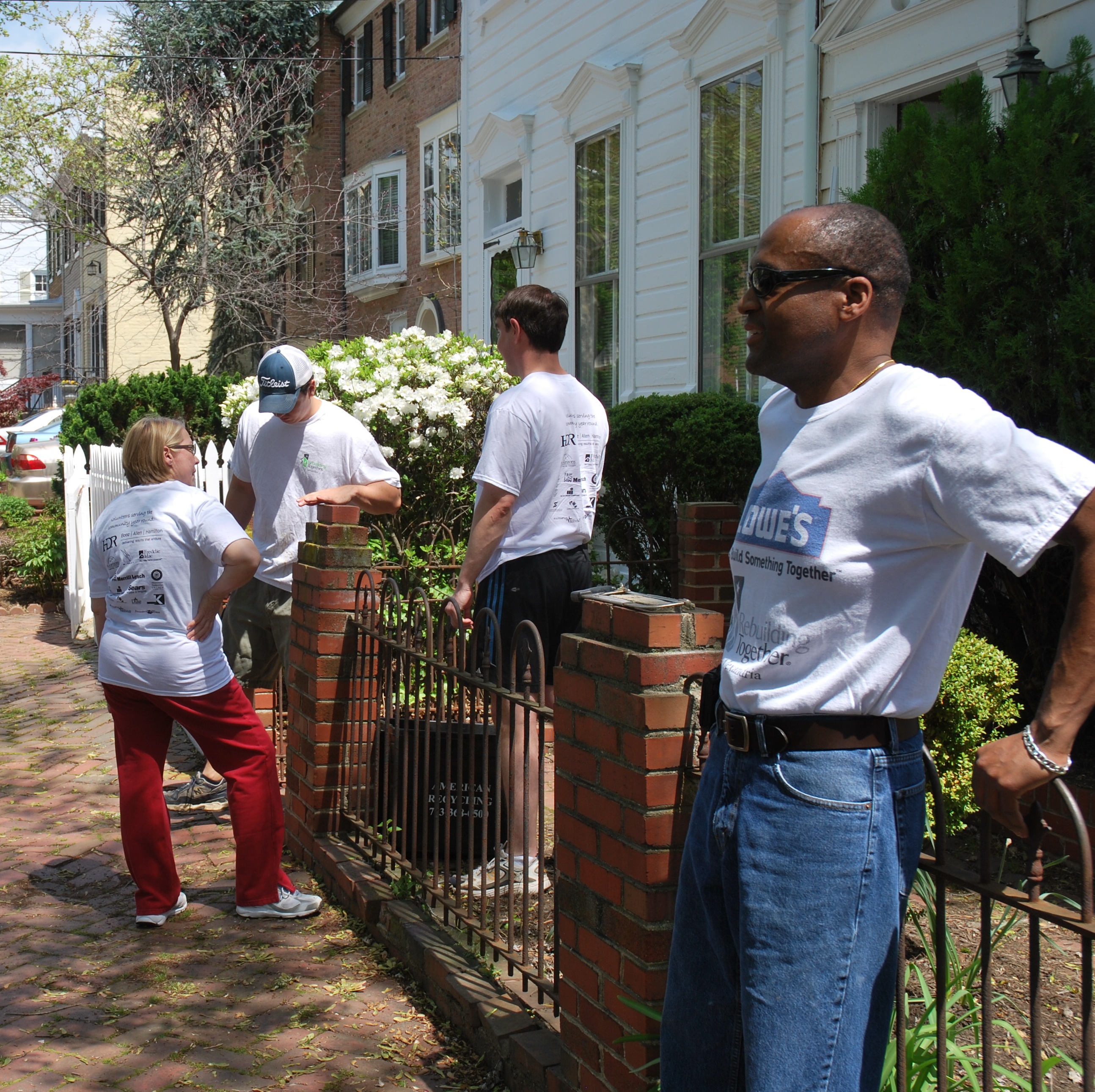 Michael Hines doesn\rquote t even want to think about how close he may have come to being forced out of the only house he\rquote s ever known.\par
The old, white house in southeast Old Town\emdash originally built in 1860 \emdash is where Hines, now 48, has lived since childhood. Like all old houses, it had been steadily showing its age for a while, but Hines was usually too busy to get much done with it.\par

Then, five years ago, Hines, a diabetic, grew ill and was forced onto dialysis. While this was happening, he began to lose his sight, too. His deteriorating health rendered him unable to work, severely limiting his income and ability to care for his own aging home.\par
Things were looking pretty bleak until someone told him about the efforts of Rebuilding Together Alexandria a little more than a year ago.\par
\ldblquote I had heard about it from a neighbor,\rdblquote Hines said. \ldblquote When I found out that they would help someone who\rquote s disabled and can\rquote t afford to fix their own home, I jumped on it. I needed the help, believe me.\rdblquote\par
Rebuilding Together Alexandria is a local nonprofit \emdash part of a national network with more than 200 branches \emdash that aids low-income and disabled Alexandrians with home repairs, making it possible for them to live in continued comfort and safety.\par
Relying on the labor of nearly 1,000 volunteers, monetary and in-kind material donations, the organization has been able to renovate hundreds of homes in the last 20-plus years.\par
Last Saturday, National Rebuilding Day \emdash RTA\rquote s biggest and busiest day of work each year \emdash 743 people contributed their time and energy, renovating 55 Alexandria homes, according to RTA\rquote s Executive Director Katharine Medina. \par
Thankfully for Michael Hines, he is included in that growing list of beneficiaries.\par
Hines said he wouldn\rquote t have been able to pay for, let alone take care of on his own, the repairs necessary to keep his house in compliance with city code. \par
Without RTA\rquote s help, he said, \ldblquote I\rquote d probably be on the street.\rdblquote\par
The work on Hines\rquote s home began over a year ago. Last year, volunteers spent three consecutive Saturdays working on the house, gutting the interior, rebuilding several walls and completely re-doing the kitchen, adding several brand-new appliances that had been donated.\par
The result? The bright, sunny kitchen is now Hines\rquote s favorite room in the house.\par
This past Saturday, a group of volunteers from Virginia Commerce Bank picked up where last year\rquote s squads had left off, rebuilding a basement staircase, clearing out backyard debris, weatherizing windows and doorways, and painting several walls inside the house.\par
\ldblquote Last year there was major work done, this year is mostly cosmetic stuff,\rdblquote Hines said.\par
Since the project began, the market value for the repairs made to Hines\rquote s home could easily have cost upwards of $35,000 to $45,000, Medina said.\par
\ldblquote The house would not be in the livable condition it is today without the volunteer\rquote s efforts,\rdblquote Medina said.\par
For Brandon Barg, part of the Virginia Commerce team that spent Saturday at Hines\rquote s house, the reason and reward for getting involved with RTA are pretty simple.\par
\ldblquote It\rquote s just a great way to give back,\rdblquote said Barg, in his third year of volunteering. \ldblquote It\rquote s a great feeling to be able to help out people who are less fortunate.\rdblquote\par
Many of the volunteers are not skilled carpenters, but because of what they\rquote ve been able to do collectively, Hines said, \ldblquote I call them my angels.\rdblquote\par
\ldblquote This is my fifth year being on dialysis,\rdblquote Hines said. \ldblquote When I first started I couldn’t see a thing, I was depressed. No where to turn to do anything with the house, no job, no money \emdash but then [RTA] came along.\rdblquote\par
Since then, things have been looking brighter.\par
\ldblquote When the house looks good, you feel better,\rdblquote Hines said. \ldblquote When I used to work, I didn\rquote t care, I was never home. When you\rquote re home everyday [laughs] it\rquote s like, \lquote Look at this place!\rquote\par
\ldblquote Now, I\rquote m getting happier, I think that as this house gets better, my health gets better as well \emdash it\rquote s like the house goes hand in hand. They were rebuilding me, actually.\rdblquote\par