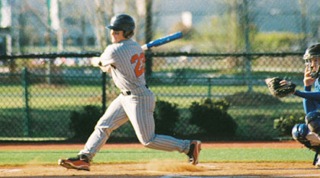 Fresh off of a Spring Break road trip to the Ripken Experience in Myrtle Beach, S.C., where they played and beat teams from Kentucky and Ohio, the T.C. Williams baseball team enters the second half of the season with a 6-4 record, riding a wave of talented underclassmen performing beyond their years.

First-year coach Andrew Simpson had little choice at the beginning of the year with only one returning starter and the entire pitching rotation to replace other than to call upon a number of former JV players.

We obviously thought that the younger guys could play or we would have kept them on JV, Simpson said. But to have sophomores in the leadoff and cleanup spots, and at starting pitcher and shortstop is pretty unusual in the Patriot District and theyve done exceptionally well.
Simpson cited sophomore pitcher Steve Weidmans development into the teams ace and shortstop Trav Clarks emergence at the plate, batting .578 on the season, as prime examples of the teams youngest members rising to the occasion.

Were very young this year but we know how to play and we know how to compete, said junior Matt Kilby, the team leader in home runs (2) and RBIs (18). I think were going to surprise some teams this year.

The Titans have already scored 85 runs in 10 games this season, and have scored 10 or more runs in 60 percent of their games.

We knew we could score some runs this season, Simpson said. These guys not getting at-bats last year wasnt indicative of their talent, it was just the result of a really good senior class.
T.C. graduated seven All-District honorees from last season and came into this season without a pitcher on the roster with a win last year.

While Simpson praised his pitching staff led by Weidman, senior Marc Grosser, juniors Alex Goldfarb, Chris Cattaneo and Rob Mannel, as well as sophomore Darwin Alcantara he also admitted that more consistency on the mound and in the field is needed.

We are extending far too many innings but thats on me and not the players, Simpson said. Their growing pains are to be expected because theyre going out there with little varsity experience and competing against a very tough schedule.

That schedule isnt getting any easier in the second half.
The Titans still have to face the likes of West Springfield, Lake Braddock and South County all ranked in the North Regions top 10 a combined four more times before the end of the regular season.

Like I told the players, were all rookies this year, Simpson said. What is exciting is that were improving. We are already better now than we were in March and we will hopefully be better in May than we are today.